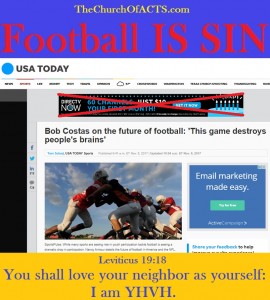 So now, America’s pastors need a sports announcer to explain the Scriptures to them so they will know football is SIN?

Unfortunately, these pastors do not seem to be getting their theology correct and need Bob Costas to explain theology to them.

Maybe someone will create a “Costas Church Of The Nonviolent Way”?

How is it that it takes sports announcers, scientists, and pathologists coming out condemning football and yet America’s pastors do not get the hint and condemn this man made legalized violence that destroys player’s brains?

What is in these pastor’s brains?

America’s pastors are still silent in the same way they are all virtually silent on the issue of rape against women.

America’s pastors are still silent in the same way they are mostly all silent on the murder of unborn children.

America’s pastors are still silent in the same way they are mostly all silent on issue of Monsanto and other companies poisoning food and polluting the earth.

America’s pastors are still silent in the same way they are almost totally absent from America’s political system where laws about violence and unborn children are written.

Almost all of them are dead silent.

And I don’t mean just silent – I MEAN DEAD.

America’s pastors have gotten to where they simply are there for the paycheck and the benefits.

Most of them are like Jim Bakker who named and claimed financial benefit but was totally absent on moral issues, and we now know was completely immoral and confessed that until he was in prison that he did not even read the entire Bible…

And Jim Bakker is still out cheating and stealing from people, to this very day, selling dirt cheap survivor/tribulation food packages for many,  many times what it is actually worth, which is almost nothing.  That is stealing.  I guess he read Exodus 20 too quickly?

America’s pastors are DEAD and I mean DEAD to God.

They eliminated God in their false theology about a false son of god who did away with the Sabbath and his Father’s Commandments.

Any brainless idiot can watch football for a minute and easily tell football is NOT about loving your neighbor and doing no harm to your neighbor.

These pastor’s time is just about UP.  Jeremiah 23.

If you are not preaching against sin then you are a party to it.

You would not be confused with Noah before The Flood.