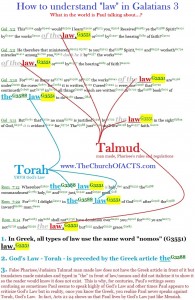 The Apostle Paul’s writings can be some of the most confusing to read anywhere in the Bible.

No single subject has been more confusing than YHVH God’s LAW in all of the so -called “new testament” Scriptures.

Misuse or misinterpretation of “law” in translations has been used by Protestant and Catholic churches for almost 2,000 years to kill people, subjugate survivors, and control their lives in the manifestation of whatever political goals and ambitions those churches and political leaders deemed.

But when we look at the actual Greek text from which all English and other language translations of the “new testament” come from, we see clear and convincing evidence in the language itself that Paul was communicating something far different than what is printed in most translations.

The Greek language shows us sometimes Paul speaks about “law” negatively and every time Paul does we see the original text is MISSING a definite article qualifier.

But, we see when Paul speaks about THE LAW of YHVH God the text has the definite article qualifier.

Bible translators came along and inserted “the” into the translation when no such “the” exists in the Greek language.

Perhaps they thought they were making the translation more readable?

Perhaps their purpose was far more sinister in an attempt to turn The People against YHVH God their Creator?

But, whatever the reason, the evidence is there unmistakably in the Greek language and to those who know these things it is like the KEY to unlocking scriptures that were previously very diffcult to understand and comprehend.

How can Paul say in Romans 7:12 THE LAW is Holy and in Romans 7:22 that Paul delights in THE LAW but then we get to Galatians 3 and Paul appears to be speaking negatively about “the law”?

THE ANSWER:  Paul is talking about 2 completely different sets of law and so was God’s Son.

In the scriptures revealing the life of God’s Son, we see a constant battle between God’s Son and the religious leaders of his time, over traditions and false regulations.

But history has shown us very clearly these constant battles were over something called Talmudic Judaism practices, rules, and regulations!

The scribes, Pharisee’s, and Priest’s were not keeping God’s LAW but they were making up false practices, rules, and regulations that kept the people from true worship and serving of YHVH God the Father as in the days of Joshua:

The People followed Joshua and Caleb and kept YHVH God’s LAW and were victorious and entered into YHVH’s Rest, unlike their parents who died in The Wilderness.

These people, millions of them, were Righteous and Blameless in all YHVH’s LAW just like Zecharias and Elizabeth the parents of John the Baptist.

Luke 1:5-6  There was in the days of Herod, the king of Judea, a certain priest named Zacharias, of the division of Abijah. His wife was of the daughters of Aaron, and her name was Elizabeth. 6 And they were both righteous before God, walking in all the commandments and ordinances of YHVH blameless.

Don’t let theologies lie to you and tell you people cannot keep YHVH God’s LAW, it is not true and the evidence shows you can.

If you live the kind of life set apart from the world, you too can be counted Righteous and Blameless in all YHVH God’s LAW at The Judgment!