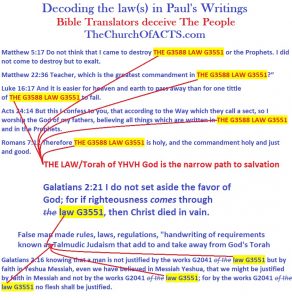 Those who have read all the Bible once or many times know the Scriptures teach it is absolutely impossible for YHVH God’s LAW to change!

But convincing people who have based their relationship to God on man’s theologies and traditions has been very difficult because at the heart of their belief is the notion that YHVH God somehow changed the requirements through the life, death, and resurrection of His Son…

NOTHING could be further from the Truth!

In Galatians 2:21, we see the Bible translators added “the” in front of “law” and in so doing they change the meaning of what Paul intended to communicate.

This Greek word is used from Matthew to James, in the Bible.  Sometimes it is preceded by the Greek definite article “the” which is Strong’s G3588 and sometimes it is not but the translators have a bad habit of inserting “the” into the translation anyway.

Every single time from Matthew to James the definite article “the” is in the actual Greek text it is a reference to YHVH God’s LAW He gave to the children of Israel.  It is always referred to positively and no one anywhere on the face of the earth questions it and what it IS.

However, the great controversy comes into all the other places where the Bible translators insert a “the” into the translation and no such word exists in the Greek text.

And the GREAT TRADGEDY of it all is the people and most of the pastors and teachers do not know this travesty has been done!!!

BUT THEN we see the children of those people with Moses just before they cross the Jordan into the Promised Land led by Joshua and they agree to KEEP YHVH God’s LAW in all its glory and THEY DO IT for many decades almost flawlessly and the Scripture says so:

It was the most glorious time is all the history of Israel as these people not only fought victoriously for their lives against millions of evil people YHVH had ordered them to defeat and do away with in the Promised Land but all the way they kept ALL of YHJVH God’s Commandments way past the life of Joshua through the lives of all the elders!

They proved anyone who sets their mind to keeping ALL of YHVH God’s Commandments CAN DO IT!!!

What is so painfully obvious in Galatians 2:21 is “law” is referencing something else other than YHVH God’s LAW.  From Genesis through Malachi it is declared hundreds/thousands of times that Righteousness is obtained through the KEEPing of YHVH God’s LAW.

And the most sad thing is the vast majority of the people believed those pastors and teachers and did not study the Scriptures for themselves as Messiah told them to DO and seek YHVH God’s Righteousness:

Why don’t the people OBEY their Messiah and do what he says to DO?

All these people are prisoners and slaves to false Christian theologies that teach them for mere belief in “Christ” they receive a veil of imputed righteousness and they do not have to obey the true Messiah and what he says for them to DO.

It is so SAD it gnaws at my thoughts all day long over the course of every year that trusted pastors and teachers could so obviously and openly DECEIVE the people and the people buy off on it and accept it.  I fully understand why Paul cried tears for 3 years in Acts 20 because he could see the future and the destruction of the people and that the people would go willingly to their slaughter!

They very words of Paul in Galatians 2:21 tell us another story that Messiah died to defeat the false ways of the Pharisee’s, Priests, and scribes.  It is those false ways which Messiah says makes the Commandment of God of none effect so it is painfully obvious Messiah is saying something those Pharisee’s do nullifies God’s Commandments:

Matthew 15:6  then he need not honor his father or mother.’ Thus you have made the commandment of God of no effect by your tradition.

There it is, plain as the nose on your face, that it is something those Pharisee’s, priests, and scribes do that makes YHVH God’s Commandments of no effect – TRADITION!!!

Today, we know those false man made traditions are Talmudic Judaism or “oral torah” false rules and regulations and teachings contrary to YHVH God’s Commandments handed down by Rabbis for many centuries and lifted up higher than the written WORD of YHVH God.

They are still to this very day doing the same things Messiah spoke vehemently against.  Messiah led the people out of Talmudic Judaism and into Torah of the Living God, His Father and the people followed him and it cost him his life!  The Pharisee’s, priests, and scribes were not about to let some upstart from Nazareth usurp their power and control over the people…

And that is pretty much the way it is to this day, pastors, teachers, theologians etc choose to wield immense power and control over the people through false man made Christian theologies that keep the people from fully knowing and obeying YHVH God and His Son.

Righteousness has always been attained by choosing not to sin and living a lifestyle where temptation is avoided and defeated.

Just as Messiah said he would not change His Father’s LAW, it is only those who find and live His Father’s Righteousness who will be saved after The Judgment.

Don’t believe the liars who twist the words of Paul to get you to disobey the Commandments of YHVH God and His Son!

2 Peter 3:14-16  Therefore, beloved, looking forward to these things, be diligent to be found by Him in peace, without spot and blameless; 15 and consider that the longsuffering of our YHVH is salvation—as also our beloved brother Paul, according to the wisdom given to him, has written to you, 16 as also in all his epistles, speaking in them of these things, in which are some things hard to understand, which untaught and unstable people twist to their own destruction, as they do also the rest of the Scriptures.

Psalm 56:5  All day they twist my words; all their thoughts are against me for evil.

Deuteronomy 16:19  You shall not pervert justice; you shall not show partiality, nor take a bribe, for a bribe blinds the eyes of the wise and twists the words of the righteous.

Don’t let false theologians and bible translators cheat you out of a FULL RELATIONSHIP with YHVH God and His Son!