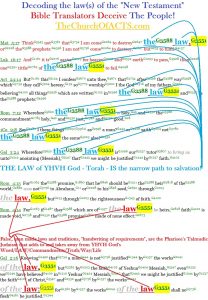 Romans 4:16 shows us that THE PROMISE to Abraham is definitely to those who keep the Torah, also known as THE LAW of YHVH.

But Romans 4:16 also shows us THE PROMISE is to those who are of the Faith of Abraham as well.

Ephesians 4:5 shows us there is only ONE FAITH:

Ephesians 4:5   one Master, one faith, one baptism;

So, if there is only ONE FAITH and those who keep THE LAW of God (Torah) are of that ONE FAITH then what is The ONE FAITH?

We also see that is the exact same Faith of God’s Son as his entire life was about keeping his Father’s Commandments.

But billions of Christians are confused about Romans 4:13-14 as it appears to totally contradict Romans 4:16

It is almost as if Paul is schizophrenic and talking out of both sides of his mouth!

Is Paul a lunatic?

A simple, careful examination of the original Greek text words in Romans 4:13-14 reveals Paul is not making reference to God’s LAW but Paul is referring to man’s law(s).

When we examine the Greek original word text, we see a 100% distinct pattern which is found consistent from Matthew onward where God’s LAW is always referred to as HO NOMOS and man’s law(s) are referred to as merely nomos.

For at least 1,700 years now, bible translators have falsified translations in other languages by false inserting a “THE” into the translations in order to make people see “the law” and for the express purpose of turning sincere people against God’s LAW.

If we look at their evil work in the context of net effect, we see these evil bible translators and theologians were the Satanic influence to turn people against the ONE true God and effectively turn them against His Son, although they do not know it.  Yet.

The false and fake Catholic Church in the early 4th century was built around the false premise that they did not have to keep God’s LAW and that people were free to break God’s LAW, particularly to break The Sabbath which YHVH God Himself said is THE SIGN between all His People and Him.

The Protestants rebelled against the Catholics but kept most of the false theologies and false translations intact for the last 500 years.

All you have to do is look at the picture of all occurrences of NOMOS (law) in the Greek original texts and it is painfully obvious a great manipulation of the translations occurred.

Since no Christian churches teach their people Greek and Hebrew, the people are kept in perpetual ignorance of what Paul was actually teaching and have been led to follow Paul and not Christ/Messiah.

And to make matters far worse, most Christians never even read their bibles enough to pick up on the huge contradictions in Paul’s writings as they blindly trust their blind pastors who were taught by those fake and evil theologians and professors at bible schools and seminaries.

The pastors and theologians found that if you keep The People ignorant and believing they get salvation out of the deal, then they will give you a lot of money!

Money is what modern Christianity is all about since the early days of Rome’s Catholic Church and times really have not changed much.

Just by faking one word in the bible translations, theologians and pastors are able to turn The People against YHVH God the Father and even reject how God’s Son lived his life.

It is all a very clever and crafty deception!

The theologians and pastors have used every device in their playbooks to cause The People to break God’s Commandments.

This greatly jeopardizes any chance The People have at salvation once they wake up to The Judgment, at the end of the 7th Millennium!

For The Promise that he would be the heir of this world was not to Abraham or his seed through man’s law but through the righteousness of Faith.

For if those who are of man’s law are heirs, faith is made void and The Promise of no effect

I purposefully left out Romans 4:15-16 so as to not make the image too large.

Now you are thinking (those of you who think) what about Romans 4:15 ?

because THE LAW brings about wrath; for where there is no man’s law there is no transgression.

No contradictions at all, from Paul.

Those at fault are the Christian theologians, bible translators, and pastors!  They will spend their eternity in the Lake of Fire for what they have done as will all who follow them.

YHVH God and His Son are bringing THE REMNANT out of this Christian Harlot of Revelation even as we speak.

You should repent to keep all Torah and be one of them!

And what about the Faith of Abraham?  How does Abraham’s Faith differ from those who keep THE LAW of God?

Abraham was called out by YHVH to follow Him and set himself apart.  Abraham obeyed and YHVH made very specific promises to Abraham based on obedience to all that YHVH commanded Abraham and Abraham’s Seed.  The Faith of Abraham is one step at a time in following and obeying YHVH.  Does Abraham know all of God’s Commandments when Abraham starts following YHVH?  NO.

But just like on the issue of circumcision, when YHVH tells Abraham to do something then Abraham always does it no matter what it is…

4 And I will make your descendants multiply as the stars of heaven; I will give to your descendants all these lands; and in your seed all the nations of the earth shall be blessed; 5 because Abraham obeyed My voice and kept My charge, My commandments, My statutes, and My LAWs.”

There is no provision in The Promise to Abraham and Abraham’s Seed, for eternal life, except that Abraham and his Seed obey all that YHVH God Commands.

And that is The Faith of God’s Son.

13 For The Promise that he would be the heir of this world was not to Abraham or his seed through man’s law but through the righteousness of Faith.

14 For if those who are of man’s law are heirs, faith is made void and The Promise of no effect

15 because THE LAW brings about wrath; for where there is no man’s law there is no transgression.

Unmasking The Doctrine Of Unmerited Grace!