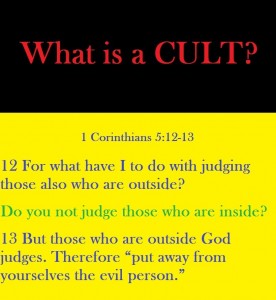 I borrowed “The Kingdom Of The Cults” by Walter Martin, from a wonderful Assembly of God Chaplain Lt. Colonel at Minot AFB, ND and read it cover to cover in a short time then moved onto other books about the “cults”.  Martin’s is or was the definitive work on “cults” and shaming.

For most of 2,000 years, Christians have been sinning against other Christians by some judging others to be in a CULT.

The Mormons and the Jehovah Witnesses have received the brunt of these sins from those who think they are purveyors of the truth.

But what is a CULT?

If we look at etymology definitions. we see the word cult first in existence in the early 1610s in France. And that word derives from Latin (Italy) and Greek cultivation of “the gods” and just keeps going right on back to Genesis and false gods.

One of the earliest indications of false gods is in Joshua 24:2 where Terah the father of Abraham is mentioned.

The Christian theological idea of a CULT revolves generally around examining religions to see if they support the deity of “Christ”.

Considered the foremost Christian author on Cults was Dr. Walter Martin and I read his work in the early 1980s and bought into it hook, line, and sinker – memorizing vast portions of the arguments and entering into many debates with those in the targeted religions during the course of witnessing.

The discussion about the attributes of Messiah is a worthy one and very important.

However, the far more important discussion is in what context are Messiah’s attributes understood in order to discuss his deity?

To understand the prophet part of Messiah, we go to Deuteronomy 13 for the definitive understanding:

Deuteronomy 13:4-5  You shall walk after YHVH your God and fear Him, and keep His commandments and obey His voice; you shall serve Him and hold fast to Him.

5 But that prophet or that dreamer of dreams shall be put to death, because he has spoken in order to turn you away from YHVH your God, who brought you out of the land of Egypt and redeemed you from the house of bondage, to entice you from the way in which YHVH your God commanded you to walk. So you shall put away the evil from your midst.

So, The Son of God came to us and made it very clear to keep the Commandments of His Father for salvation and eternal life.  Matthew 19:17

Anybody, any church, any prophet, any teacher, any pastor, any theologian, any Bible translator who attempts to turn you away from keeping the Sabbath of YHVH and holding fast to all THE LAW given to the children of Israel is an absolute imposter and a phony unbeliever.  They might be sincere and at one time born again but they fell away from the true faith of Yeshua Messiah and that faith IS keeping His Father’s Commandments.

In fact, anyone who attempts to cause you to break the Commandments of the Most High should be put to death (not by you) and they will be as soon as they stand at The Judgment.

The Son of God never, ever, in even the slightest word mentioned to anyone they should not keep The Sabbath and all THE LAW of YHVH God His Father!

Neither did the Apostle Paul.

Neither did the Apostle Peter.

Neither did the Apostle James.

Neither did the Apostle John.

If you go to a church that indicates you should not keep the Sabbath of YHVH and His Son, which is YHVH’s gift to you, and indicate THE LAW of YHVH has passed away then they meet the biblical definition of FALSE PROPHETS.

And that is the definition of a FALSE RELIGION.  Read James 1 as James describes keeping Torah as the only true religion before YHVH God the Father.

And what is a CULT?  Any false religion or people that does not keep all the Commandments of YVHH God the Father that He put in His Son, called Torah/LAW, so that the people 2,000 years ago and since, right up to today, would hear Him and obey His Commandments.  That is the whole purpose of The Son of God – those Commandments, per Deuteronomy 18:15-19.

Colossians 1:15 tells us the Messiah is the IMAGE of the invisible God/Elohim.

So whether a false religion like the Baptists or Methodists obey 50% of the time and the Mormons obey 49% of the time is of very little consequence as long as they are both opposed to keeping The Sabbath and all The LAW of YHVH God the Father and His Son.