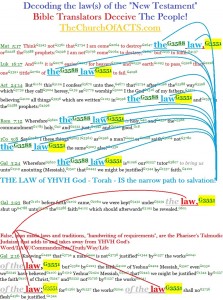 Have you been deceived by Bible Translators?

BILLIONS of people have been deceived by Bible Translators and do not know it.

The so-called “new testament” was written in Greek in order to aid the evangelism of the nations who spoke many other languages.  In order to get the message of YHVH God and His Son out to all the nations, language translators in both Hebrew and Greek have to get the message RIGHT.  Some Bible translations are better than others but, for example, in English there are hundreds if not thousands of mistakes that translators make.

This short article discusses one such glaring mistake made by Bible translators.

All through the “new testament” law is talked about and few people know several laws are being discussed.  In the Greek original, every time “THE LAW” is mentioned it means THE LAW of YHVH God the Father and it is inscribed in the Greek language as:

ALL TIMES, when other laws are discussed, the Greek text merely refers to “law” and it is inscribed in the Greek language as:

I always use capital letters to reference THE LAW of God our Father.

The reason I do that is because I want to be absolutely clear as to what is really being stated and these English translations are as muddy as the Mighty Mississippi River.  Most of these Bible translators were prejudiced and followed the guidance of Kings and wealthy Nobility who were theologically prejudiced.

God is no respecter of persons, Romans 2:11.  But Kings and Nobilityare not interested in Bible translations that contradict their authority and the ways they rule their people and IF those Bible translators had indicated the Truth of the Greek original text then those Kings and Nobility would have been obligated to ensure their subjects, The People, would have been off from work during the 7th Day Sabbath and giving glory and honor to YHVH God the Father and His Son and those Kings and Nobility would have had to submit themselves to THE LAW of YHVH God the Father just like His Son did.

God’s Son is our truest example of how to live The Faith that is the only TRUE FAITH in the Bible.

Galatians 3:23 teaches us how the children of Israel were kept in a false religion based on the adding to and taking away from THE LAW of YHVH God.  God’s Son came to deliver his Father’s people from the tyranny of Pharisee’s, Sadducee’s , and Scribes who had perverted The Way of YHVH God.  These corrupt religious officials had replaced the True Faith of obeying the written Torah with a false substitute based on word of mouth, handed down traditions of corrupt Rabbi’s and Priests.

Do NOT let false leaders get in The Way of your salvation and eternal life.  DO NOT let theologians, pastors, and TV teachers rob you of your relationship with YHVH God and His Son in becoming THE IMAGE of His Son.  Romans 8:29

You can learn all these things and a lot more here: