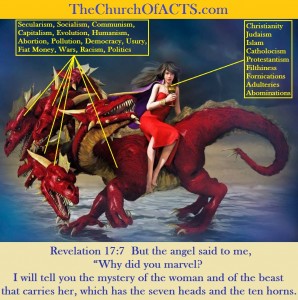 All things against YHVH God and His Commandments are the Harlot of Revelation and the Beast System.

The Harlot of Revelation is an adulterous woman who claims legitimacy but engages in disobedience and partial truths mixed with outright lies.

The Beast System is everything in the world that is totally against YHVH God and His Commandments.

The Harlot began in the 4th century AD through the formation of a state sponsored religion against the Commandments of YHVH God and His Son with false doctrines and false laws, rules, and regulations much in the same way Judaism set up its false religion by adding to and taking away from YHVH God’s written Commandments and falsifying The Way of salvation and eternal life.

The Harlot progressed to control all social and economic trade throughout the world through the government of Rome first, then Spain, Germany, France, England, and finally America.

The Protestant Revelation was but another form of the Mother Harlot of Rome and continued in false teachings and doctrines while rejecting the Commandments of YHVH God and His Son.

Over the centuries, the Beast System’s hatred of the Harlot of Revelation grew and grew until at last the Beast System began overthrowing the Harlot in the forms of laws and regulations meant to separate The People from any adherence to the Commandments of YHVH God in society and commerce.

16 And the ten horns which you saw on the beast, these will hate the harlot, make her desolate and naked, eat her flesh and burn her with fire.

The Harlot of Revelation through her false Catholic and Protestant daughter churches killed millions of simple people who lived by YHVH God’s Commandments and rejected their religious war machines.

Very harsh plagues, judgments, and death on a scale not ever seen in human history are only a few months away, as written in the book of Revelation.

4 And I heard another voice from heaven saying, “Come out of her, my people, lest you share in her sins, and lest you receive of her plagues. 5 For her sins have reached to heaven, and God has remembered her iniquities.

14 Blessed are those who do His commandments,

that they may have the right to the tree of life,

and may enter through the gates into the city.

15 But outside are dogs and sorcerers and sexually immoral

and murderers and idolaters, and whoever loves and practices a lie.