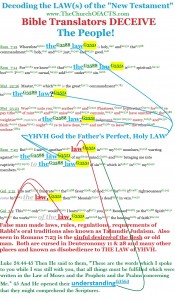 Romans 7:23 is a very interesting scripture that uses the Greek word nomos for “law” 3 times.

The 1st time it is clearly talking about the sinful desires of the flesh which everyone agrees in not YHVH God’s Holy Law.  Paul is communicating that something evil and contrary to God exists within his flesh which wars against THE LAW of his mind and brings him into captivity to sin which is defined in THE LAW of YHVH God the Father.  Of the 3 times “law” is used the first instance does not have “the” in the Greek original.  It has been falsely inserted.

Why does Paul describe THE LAW of his mind?

Because from a little child he was taught by his Hebrew parents to memorize the Scriptures and the reason is living those scriptures is THE ONLY WAY to have a relationship with YHVH God (and His Son):

Deuteronomy 4:8-10  And what great nation is there that has such statutes and righteous judgments as are in all this LAW which I set before you this day? 9 Only take heed to yourself, and diligently keep yourself, lest you forget the things your eyes have seen, and lest they depart from your heart all the days of your life. And teach them to your children and your grandchildren, 10 especially concerning the day you stood before YHVH your God in Horeb, when YHVH said to me, ‘Gather the people to Me, and I will let them hear My words, that they may learn to fear Me all the days they live on the earth, and that they may teach their children.’

That is the entire purpose of life to live by the Word of YHVH God the Father in right relationship!

And the people Moses was talking to in Deuteronomy marched over the river Jordan a few weeks later and methodically took the Promised Land by storm with the aid and direction of YHVH the Father and the scripture says they served YHVH all the days of their lives and all the days of the elders who outlived Joshua.  That means they were Righteous and Blameless before YHVH God the Father in all the commandments, ordinances, statutes, and judgments just like Zecharias and Elizabeth were in Luke 1:5-6

Evil Bible translators have for centuries mistranslated the Greek and Hebrew scriptures!

But even if using a bad Bible anyone can easily start reading from Genesis to Revelation and see clearly that YHVH God never ever changes and His Words shall never pass away.  It is only when men of false “learning” come in and force their “educated” selves upon the people that they twist and pervert the Word of YHVH God the Father and convince the people to follow them instead of YHVH and His Son.

This caused poorly learned people to doubt YHVH God the Father’s LAW and enter into living contrary to His Ways!

These false ways were in the form of false rules, ordinances, regulations, and teachings handed down by Jewish Rabbis for centuries and most were false traditions that were contrary to THE LAW of YHVH God.  These false theologies/traditions had infiltrated all the schools of learning and were forced down the people’s throats by those who had gone to school to learn the false theological ways of man.  A person who was smart, like Mary and Joseph and continued to ignore the false rules were relegated as outcasts in society and we see the prevalent discriminatory attitude in this verse:

And to this very day, massive Bible translation activities are occurring and they are driven by false theologies that are contrary to THE LAW of YHVH God the Father!

This is different but also the very same false religious activity where the people are under the spell of pastors, teachers, and theologians who have gone to Bible schools, seminaries, and doctoral programs of theology all programmed to teach the people to live contrary to THE LAW of YHVH God the Father.

So NOW, I say the time has come to DUMP all of those falsely trained pastors, teachers, theologians, and Bible translators.  In fact, that is what Revelation 18:4-5 says to DO:

These men had lived in darkness and evil for so long under the rule of false theologies that even at that time after Yeshua was raised from the dead they still suffered from poor understanding because of the influence of those Satanic false Talmudic Judaism teachings forced down their throats by evil men of theology.

And guess what?  The exact same thing has been going on since 325 AD or before when Constantine stole the true faith, twisted it, and instituted a perverted false Christianity as the state religion of Rome.  These false theologies continued right into the Protestant, non-denominational, and independent churches of Christianity to this very day!  All of them are based on theology contrary to YHVH God the Father’s LAW which is mostly seen in Exodus through Deuteronomy.

As Revelation 18:4-5 says it is time to return home to YHVH God the Father and His TORAH (Son) or else face the massive death, destruction, and plagues of the book of Revelation.  It is not yet too late to repent but that time is soon to be upon us!