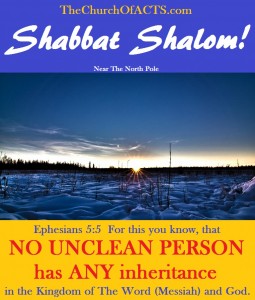 Modern Christianity is a cult fraud.

The Apostle Paul says no unclean person has any inheritance in the Kingdom of God.

Sometimes, people see a long list of invalidating behaviors and tend to focus only on the really, really bad murderers who will be placed in the Lake of Fire.

Jude says the same thing about complainers.  Funny how complaining got the folks in The Wilderness in great trouble with YHVH, isn’t it?

This life is a test.

We are tested to find out if we are worthy to enter into the Kingdom of YHVH God and His Word.

Long before this world was made and Adam created, YHVH set up His LAW.  And we know from a multitude of scriptures that His LAW never changes.

Not so very long after Messiah died then Apostles and many more disciples of God’s Son also began dying as they were persecuted for keeping God’s LAW contrary to the Talmudic “oral law” of the Jewish authorities.  These disciples also would not worship Caesar as God either and they were endlessly persecuted and killed by the Romans.

Then, along came Constantine and lured fake followers called tares into forming something called the Catholic church where they could comfort themselves in a religion that denied THE LAW of YHVH the Creator and set up a false “son of god” and eventually called his name Jesus and these theologians manipulated The Word of God to claim God’s Son freed people from his Father’s LAW.

Nothing could be further from the Truth.

What makes a person UNCLEAN is defined in the pages of Exodus thru Deuteronomy.

There is NO DEFINITION for what makes a person UNCLEAN in the pages of Matthew thru Revelation.

God’s Son said this, at one point:

If you understood in another place what God’s Son says about adultery that it is adultery even if one lusts/covets a woman in his mind/heart then simply apply that principle to eating unclean things.

The decision to defy YHVH God the Father has already been made before a man eats something unclean.

It is that act of defiance that defiles the man because in his heart/mind he has made the decision to eat something unclean before he ever puts it in his mouth so he is defiled and guilty before ever consuming the unclean thing.

Today in this modern world, science tells us that the things God says are unclean are indeed unclean, contain viruses, deadly bacteria’s, deadly diseases, and consume pollution by either living at the bottom of the lakes, rivers, and oceans that man pollutes or by consuming things that eat those things.  It is all a very vicious, unclean circle from a physical, natural health perspective.

In the early 4th century, the FAKE Catholic religion began the organized process of separating people from the saving commandments of God the Father, which His Son lived and kept all his life.

Their process is called Theology.

When Martin Luther separated from the Catholic Church, he carried with him the majority of the Catholics false theology in the many forms of denying God the Father’s LAW.

Today, virtually every Christian church you see lives in some form of totally denying God the Father’s LAW and that is the reason for the total and very painful destruction written in the book of Revelation and it is coming very soon!

Let no one deceive you with empty words…

Ephesians 5:5-7  For this you know, that no fornicator, unclean person, nor covetous man, who is an idolater, has any inheritance in the kingdom of The Word (Messiah) and God. 6 Let no one deceive you with empty words, for because of these things the wrath of God comes upon the sons of disobedience. 7 Therefore do not be partakers with them.

Come out from among them and do not partake of their theologies.