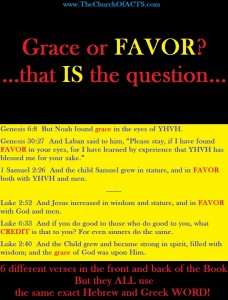 First, let no one be deceived!

How do we KNOW with absolute certainty the words used for “grace” and favor in the “old and new“ testaments are the same, exact Hebrew word and meaning?

So, how do we understand how this word that is often translated FAVOR is also translated as grace?

Simple, we go to the stories and see how it is used to derive the meaning…

First, we go to the story of Laben and Jacob in Genesis 30.  It is far more than just a little crystal clear that Laben understands the fact that he is blessed via his relationship with Jacob.  Laben has profited greatly from the relationship even though Laben is not always up front and honest but it is the same biblical principle we see about Abraham that those who bless The Righteous will be blessed themselves by YHVH.

Then, we go to the story of Samuel in 1 Samuel 2 and we see Samuel lives such a life that he grows in FAVOR with both YHVH and men!  One must keep Torah, i.e. obey what YHVH God says to DO in order to gain FAVOR with him.  We know this happens with men because men do not generally go around giving out FAVOR to anyone unless they are in good relationship with them.  It is the same way with YHVH God our Creator.  He gave His Law/WORD/Commandments/Rules and if we follow them we are promised blessings!

Next, we go to the story of “Jesus” (Yeshua Messiah) and we see the same exact wording used for God’s Son as was used in the verse about Samuel because, in Luke 2:52, Yeshua grows in FAVOR with both YHVH God and men.  This is not some mystical “grace” that some benevolent man bestows upon another man.  NO.  It is indicative of the ability to live a life of a certain Righteousness that gains FAVOR with other men as well as with YHVH God the Father Himself.

Next, we go to Luke 6:33 and see the same exact word used again but it is translated as “credit”.

The message is crystal clear!

Luke 6:33 is not about some mystical “grace” bestowed by a benevolent man or God…

It is the same with YHVH God the Father and His Son.

Either obey YHVH’s Commandments or expect to fail The Judgment:

Hebrews 10:26-28  For if we sin willfully after we have received the knowledge of the truth, there no longer remains a sacrifice for sins, 27 but a certain fearful expectation of judgment, and fiery indignation which will devour the adversaries. 28 Anyone who has rejected Moses’ law dies without mercy on the testimony of two or three witnesses.

DO the Right thing!  Keep Torah, YHVH’s Sabbath and THE LAW He gave His people!

PS…  Here are the Hebrew and Greek Strong’s numbers:

Genesis 30:27  And Laban said to him, “Please stay, if I have found favor (H2580) in your eyes, for I have learned by experience that YHVH has blessed me for your sake.”

PSS…  And how do you know with absolute certainty the “law” in Galatians 2:21 is not talking about THE LAW YHVH God the Father gave the children of Israel?