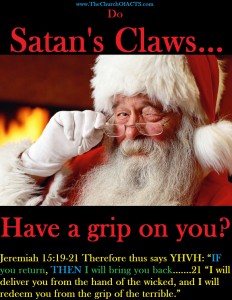 I awoke early to the sound of the radio playing the local Christian music station today…  They were playing Christmas music.  I monitor that station every morning as I wake up to see if anything of substance is being played there.  Funny, I keep listening to see if I will ever hear a great story teller like Don Fransico or a preacher of Righteousness like Keith Green.  Usually there is not much substance.  I listen to the words to see if they are scriptural or not.  I heard a song about Santa Claus, eleves, snow, and no mention of the Son of God at all.  I usually try to go back to sleep, after first hearing the music for a few minutes, and today was no different.

But what happened after I got back to sleep this morning was very different.

I had a dream/vision of Santa Claus who was revealed like a vulture predator rather than a kindly old man delivering gifts.  He was huge!

He returned to a massive crowd waiting for the next ride.

They were not going anywhere, as if they had nothing to do, just waiting…

Waiting for the inevitable, or so they thought.

When they were dropped into the fire, they screamed “NO, this cannot be right!!!”

But no one heard them.

In the distance, the crowd saw the fire but from their position it merely looked like light.

They thought it was The Light.

They were all happy and anticipating entry into heaven.

But what they got was far short of their wildest dreams.

“Who will tell them?” thundered the very familiar voice…

“I will tell them, Father” was my reply.

I asked why a bird of prey and why the claws?

“My People who were called by My Name have given themselves over to fables” was the answer.

“The bird is an unclean bird, the claws are the lies deep in My People’s hearts and minds and in their goings and comings” was the revelation.

I knew the time.  Far above me I could see the New Jerusalem coming down.

I woke up slowly, I got up and made my way to the bathroom, then changed my clothes and all I could see was a close up picture of the face of Santa Claus.  I looked out the back window and saw a dusting of new snow on the railings of the deck and on the deck itself.  I made my way downstairs to the kitchen and started some boiling water in the kettle, for coffee, and cleaned the glass brewer, from yesterday, and put a tablespoon of coffee into it.  I could see the close up picture of Santa Claus’ face.  It was taunting me.

I made my way to my office but stopped at the front door to peer out the window.  There was no dusting of snow on the ground or on the concrete driveway but the driveway appeared slightly wet.  I had not looked at the ground when I was upstairs.

“The washing of the Water of The Word, the shed blood of My Forgiveness never reaches them” came the familiar Voice.

I knew how close so many people were to forgiveness of sins but they might as well have been a million miles away because of their ignorance and how they had turned to fables and false or incorrect beliefs.

I came to my computer and did a Bible search on “claw” and nothing useful.  I closed my eyes and focused on the talons and I saw the strength of their grip.  I searched for “grip” and the sole verse in Jeremiah 15 revealed itself.

I searched with Google images and the huge face of Santa Claus winking showed itself to me.

Then the letters of his name readjusted to “Satan’s Claws”.

In a few minutes, I developed the picture you see, then the water kettle whistled to me and I went to the kitchen and poured the water into the coffee and returned to my office to begin the story.

I searched the Bible for “fable” and this is the list:

1 Timothy 1:4  nor give heed to fables and endless genealogies, which cause disputes rather than godly edification which is in faith.

1 Timothy 4:7  But reject profane and old wives’ fables, and exercise yourself toward godliness.

2 Timothy 4:4 and they will turn their ears away from the truth, and be turned aside to fables.

Titus 1:14  not giving heed to Jewish fables and commandments of men who turn from the truth.

2 Peter 1:16  For we did not follow cunningly devised fables when we made known to you the power and coming of our Master Yeshua Messiah, but were eyewitnesses of his majesty.

For several years now, I have preached against false theologies and illogical teachings.  Anyone with a rational mind can see through the false theologies and illogical teachings but most are prevented from seeing through them because they are not willing to be obedient to YHVH God’s Commandments.  When YHVH God created man, He created something that physically bound doing what He says to do to man and when man violates those Commandments then man is blinded to some degree.  The more man violates those Commandments the more he is blinded.  This principle is just as sure as the law of physics of pouring a glass of water from head high and it hitting the ground and splashing all over the ground.  This is all explained in Isaiah 29.

To this day, I am always amazed at how tightly people hold on to false beliefs and illogical thinking.

And in the vision I saw this morning, the strength of the predator’s grip was amazing.  What was more amazing was the willingness of people to enter into those claws and let them sink into them.

But, Jeremiah 15 shows the remedy however few people see it or think it applies to them:

“IF you return,
THEN I will bring you back;
You shall stand before Me;
If you take out the precious from the vile,
You shall be as My mouth.
Let them return to you,
But you must not return to them.

The problem of most people who decided to follow God but got sidetracked with fables is they did not “TAKE OUT the Precious from the vile”!

God’s Son, Yeshua, was entirely correct when he said this:

Matthew 7:14  Because narrow is the gate and difficult is the way which leads to life, and there are few who find it.

Repent and DO the first works of YHVH God the Father.  Revelation 2:5

The 1260 days of Daniel and John are almost upon you, even at the door!

PS… This vision/dream is not about exposing the origins of Santa Claus.  Everyone can look up pagan beginnings for themselves and of most things pagan regarding Christmas, even the anti-God roots of ChristMASS.  This vision/dream is about what entering into things not of YHVH God the Father and what those things do to you and how it affects your life and eternity, even if they are entered into seemingly innocently.

I did one last thing before publishing this vision/dream this morning and sending it for a wider distribution.  I remembered YHVH’s explanation of the “unclean bird”.  I searched the scriptures for “bird”:

Revelation 18:2  And he cried mightily with a loud voice, saying, “Babylon the great is fallen, is fallen, and has become a dwelling place of demons, a prison for every foul spirit, and a cage for every unclean and hated bird!”

Can we equate people to birds?

The Scriptures sure do!

But it goes deeper:

In YHVH I put my trust;
How can you say to my soul,
“Flee as a BIRD to your mountain”?
2 For look! The wicked bend their bow,
They make ready their arrow on the string,
That they may shoot secretly at the upright in heart.
3 If the foundations are destroyed,
What can the righteous do?

4 YHVH is in His holy temple,
YHVH’s throne is in heaven;
His eyes behold,
His eyelids test the sons of men.
5 YHVH tests the righteous,
But the wicked and the one who loves violence His soul hates.
6 Upon the wicked He will rain coals;
Fire and brimstone and a burning wind
Shall be the portion of their cup.

7 For YHVH is righteous,
He loves righteousness;
His countenance beholds the upright.

Make no mistake about it.  It is YHVH’s Righteousness we are instructed to seek, not any other:

Matthew 6:33  But seek first the kingdom of God and His righteousness, and all these things shall be added to you.