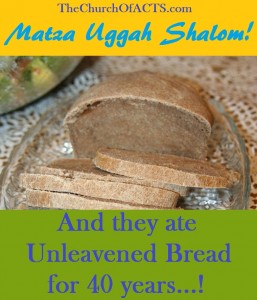 In the very first Feast of the 7 Days of Unleavened Bread, every man, woman, and child who came out of Egypt ate nothing but UNLEAVENED BREAD CAKES for 7 days.

It never ceases to amaze me how some people have no interest in ALL the Scriptures while at the same time declaring themselves experts.

There is NO OTHER EXAMPLE of how to keep the Feast of Unleavened Bread than that of those who walked out of Egypt. How can people possibly think it is okay to eat anything besides unleavened bread? People come here and they argue endlessly that the Commandment does not specifically state eating NOTHING but unleavened bread for 7 days and they are more than willing to TOTALLY IGNORE how the Feast was KEPT.

These Israelite’s and mixed multitude who walked out of Egypt had to walk around 360 miles (580 kilometers) to the Red Sea, THEN CROSS IT, as firstfruits and ON FIRSTFRUITS, then they watched as YHVH caved the waters back on the Egyptians and killed them all to gain HONOR for His Name.

Then the people rejoiced for a long, long time singing The Song Of Moses!  The Feast was over but their rejoicing was not over.  It was the 8th day of Firstfruits and as the Scripture’s state then they were able to eat anything they wanted.  They had animals with them and whatever left over UNLEAVENED BREAD CAKES remained.  Probably not much of that UBC was left!  Since it was Spring, they probably scavenged the countryside for berries, fruits, greens, and whatever else they could find near the sea in Arabia.  They had great fellowship that day, on FirstFruits.  Imagine the stories told at campfires after their CHILDREN crossed into The Promised Land and conquered!

Then they walked a lot more days and walked right into Exodus 16 and YHVH gives them MANNA (unleavened bread) and that is the only bread they ate for 40 more years.

And very little infuriates YHVH more than complaining about the circumstances He Himself puts people in…  He wants them to trust Him and demands their loyalty in ALL His Covenant or they simply are not worth the trouble to have around any longer!

They go out in the morning, spend hours gathering the manna, then boil it or bake it and consume ALL IF IT each and every day.  Manna was not allowed to sit around for days and leaven…
And people today have that incredible example in The Word and yet they still want to argue about their right to eat anything they want during the Feast of Unleavened Bread?  I don’t get it.

What in the world do people think the Feast of Unleavened Bread is all about IF IT IS NOT ALL ABOUT THOSE WHO CAME OUT OF EGYPT AND HOW THEY KEPT THE FEAST?

Have you walked with them?

Look at the two pictures of UNLEAVENED BREAD CAKES.  One group of people sees unappetizing flour and desires to eat what they want.  The other group of people who had never before noticed CAKES in Exodus 12:39 finds that very interesting, makes the attempt to bake them, then eats them and the realization hits them like a TON OF BRICKS that UNLEAVENED BREAD CAKES is the miracle of how those Israelite’s survived for 8 days of walking.

One half day on Passover to Succoth, 7 more days to the Red Sea, and through the night on the 8th Day to the shore in Arabia where they were firstfruits.

The people who see the Truth and DO IT, are The Righteous and The Blameless.

The people who complain are…  NOT.

The Righteous and Blameless look at the Scripture, what it says to DO, and what they DID, and they say “NO PROBLEMO, let’s DO IT”.

Enjoy focusing on your forefathers walking about 360 miles in 7.5 days, during this Feast. 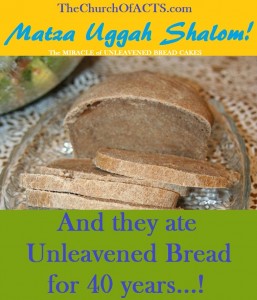 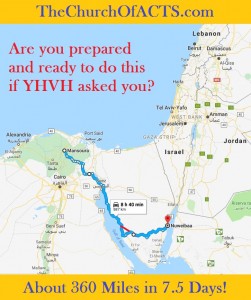