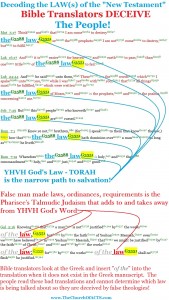 It is so critically important to understand WHO and HOW God’s Son Yeshua is made and how he is constructed, his physical makeup, and that the words he speaks out of his mouth are not his words and he even says so.  We find those things in Deuteronomy 18:15-19

God’s Son tells you how absolutely critical it is to understand these things here:

John 5:46  For if you believed Moses, you would believe Me; for he wrote about Me.

So, when we get to Galatians 2:16 we see Paul stating that man made false laws and regulations are not a substitute for obeying YHVH God the Father’s LAW which is what He put into His Son so the people could hear YHVH.

That is the whole purpose of God’s Son.

Paul, in the original Greek language, makes it crystal clear when he talks about man’s law and when he talks about God’s LAW but bad Bible translators covered up or obscured the obvious differences in their translations from Greek because they were under the spell of false theology which had already done away with YHVH God the Father’s LAW.

God’s Son is like a last chance effort by YHVH the Father to reach the people with THE LAW He gave to the children of Israel in The Wilderness.

This is the whole purpose of Revelation 21, after The Judgment to reward those who kept God’s Commandments.

So, Paul is telling us there is no way man following other men’s false doctrines, law, rules, regulations and requirements particularly what is today known as Talmudic Judaism is going to justify man at The Judgment.

Man is justified by the same faith Yeshua Messiah showed us in that he obeyed all the Commandments of YHVH his Father and showed us how to live and how to be justified in the presence of His Father.

And John, later wrote, that anyone who claims God and His Son must keep Torah just as God’s Son walked.  1 John 2:6

We are justified by hearing and obeying all that YHVH God says because as He says through the mouth of His Son:

John 15:14 You are My friends if you do whatever I command you.

Those who do NOT DO what YHVH God the Father commands them are NOT His or His Son’s friends.

If you go to a church that does not keep the Sabbath and THE LAW of YHVH God the Father and His Son then get out as that is the commandment of Revelation 18:4-5

PS…  You can see and share all “the law” posts and proofs from here: https://thechurchofacts.com/share-the-law-posts/