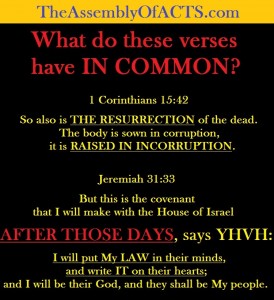 What do these verses have in common?
Most people do not have a clue about the resurrections. In the days of God’s Son, the discussion of the resurrection was a never ending debate between the Pharisee’s, Sadducee’s, and other half baked religious sects. And so it is to this very day!
When MOSES stood across the Jordan River and told the Children of Israel that they would go off into far off lands and sin exceedingly yet return to Israel, MOSES was not kidding…
That is the Resurrection (one of them) in full.
MOSES was not merely saying their ancestors would come back to Israel, MOSES was saying the very children standing before him that day would come back with all their subsequent ancestors.
The Promise to the seed of Abraham is not merely for a good life on this earth if you obey all YHVH’s Commandments. It is a promise for all eternity.
But many subsequent generations argued over the resurrection as if it is a worthwhile endless discussion, rather than keeping Torah and making sure every orphan in their towns was fed and not hungry and was being instructed in THE LAW in the correct manner so they would not commit sins!!!
Do you hear ME, Israel?
The time is rapidly approaching when MOSES told Daniel there would be 1260 days where some would awaken to everlasting life. That is the first resurrection of the dead and the living and by my count it happens next year.
Do you hear ME, Israel?
MOSES said some will awake who are wise and they shall shine like the brightness of the firmament and they have turned many to Righteousness and they will shine like the stars forever.
Do you hear ME, Israel?
The Woman of Revelation 12:14 will both awake and be Taken to The Wilderness where she shall be nurtured for 1260 days on a secret location on the earth (which is where I say I just happen to live…) She is The Righteous and Blameless in all YHVH’s Commandments. She is both the Children of Israel who crossed the Jordan with my buddy Joshua and she was the parents of John the Baptist, and she is all the Torah keeping Saints who perished by the sword as the Harlot of Revelation that is in Rome killed many of those who were Righteous and Blameless in all YHVH’s Commandments as well as many who were trying to be righteous and blameless but did not have enough commandment keeping oil in their lamps and were known as having “turned to God” and were called OffSpring.
Do you hear ME, Israel?
When MOSES stood about the waters of The River in Daniel chapter 12, he did not mince his Words. YHVH spoke straight through MOSES’ mouth as if YHVH was there Himself.
Do you hear ME, Israel?
When my friend Yeshua, God’s Son, was on the earth and he spoke, it was as if YHVH was standing right there. When Yeshua spoke to Thomas after Yeshua told Thomas to touch into his wounds and Thomas said “MY YHVH and my Elohim” Thomas was not talking to Yeshua but Thomas was address YHVH the ONE, the True, and the only God who is our Father and Creator, and while Yeshua’s mouth moved, the Words that Yeshua spoke were as if YHVH was standing right there.
Do you hear ME, Israel?
Those things in the way I just described them are the continuing fulfillment of Deuteronomy 18:15-19
Very few people understand these things but MOSES tried to explain them as best he could in those days and times as well did Yeshua when he tried to explain those things and tell the people that the Words they heard from his mouth were not his Words: John 14:24
Can you hear ME now, O Israel?
Or are your eyes still shut and your minds on other things?
The Woman of Revelation 12:14 her mind is continually DOing Psalms 1:1-3 and she does not have any time at all for things that are not the Will of YHVH.
Shalom.
PS…
If you have difficulty seeing Moses in Daniel 12 then take a careful look at this: https://thechurchofacts.com/2018/04/14/all-we-know-about-michael-the-arch-angel/
Donate
Play
HIDE PLAYLIST