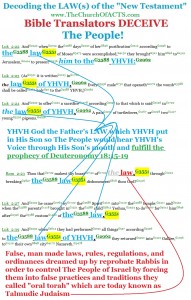 In Romans 2, Paul has just told those who hear YHVH God the Father’s LAW that they are NOT justified before YHVH God and His Son and they will not pass The Judgment and will not enter into the Kingdom of Heaven.

Paul informs those hearers that only those who DO YHVH God the Father’s LAW will be justified before YHVH the Father and His Son, no one else!

Then a few sentences later, Paul is patronizing the Jewish teachers and their boasting about THE LAW and their status but suddenly Paul does an about face that seems totally inexplicable to most because he has been making THE LAW seem great but he accuses those teachers of boasting also about law but breaking THE LAW.

Paul is talking to false teachers and explaining to them their false rules, regulations, ordinances, and written requirements which they practice and enforce upon all The People is trash.

He tells them they are teachers of babes.

He tells them they have the form of knowledge, the form of truth, but in the end it is nothing but a false image which has the form and likeness of godliness and holiness, and those false teachers sure do make it appear to shine bright but in the end what the are doing is FALSE.

Paul evens tells them to their faces they are dishonoring YHVH God the Father!

Back in those days saying things like that could get you beaten or killed.

And you know, it could get people beaten or killed these days if anyone was brace enough to go face to face with the famous church leaders of the world and tell them they are preaching and teaching LIES.

But almost no one confronts anyone these days.

Paul was not afraid to confront unrighteousness and did it on many occasions even calling false leaders severe names like whitewashed walls!!!

In those days, the false, man made traditions, rules, regulations, requirements etc were known as “oral torah” nothing more than passed down falsehoods used to control the people and they still practice those same things to this day and it is known as Talmudic Judaism.

Christian theology has made up endless false doctrines in order to control people’s thinking and in order for them not to know the truth about The Gospel which Hebrews 4:2 tells us was preached by Moses in the Wilderness.

Christian theology has led billions of people down the road of unrighteousness and into the Lake of Fire by telling the people they no longer are held responsible for keeping YHVH God the Father’s LAW.

But all the prophecies of the Last Days of this Millennium, in the Bible, explain to us the sole reason for the judgments of Revelation in the Last Days is because The Covenant was broken and the people continued to break YHVH God’s LAW and not keep it.

They have Bibles and Matthew 6:33 still stands to this very day as a Commandment spoken through the mouth of God’s Son TO SEEK YHVH GOD THE FATHER’S RIGHTEOUSNESS:

That is God’s Son telling you to seek YHVH God the Father’s Righteousness!!!

That means, in short, keep the 7th Day Sabbath and keep all THE LAW of The Covenant.  Isaiah 56.

Read the Torah from Exodus through Deuteronomy over and over again and learn how God says you are supposed to live in His Righteousness!

That is what His obedient Son DID and IF you follow His Son that is what you DO!

PS… You can see and share all “the law” posts here: https://thechurchofacts.com/share-the-law-posts/