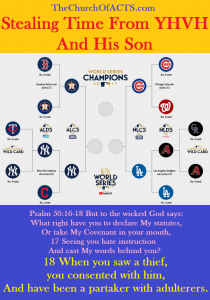 The Scripture says when we stand in the path of sinners we will be judged just like they are judged.  Psalms 1.

Revelation 18:4-5 says to come out from among them or we will receive their plagues.

Modern sports provide young and old people with horrible role models.  There seems to be a never ending stream of rape, drugs, adulteries, tax evasion, crimes, and Sabbath breaking perpetrated by those in professional sports.  Those stories are in the news constantly particularly in extreme violent sports such as football.

Baseball, at first, seems less violent but it has all the aspects of the various sins I listed above.

More than anything else, baseball steals from YHVH’s Sabbath and from doing YHVH’s Will.

No matter how you add it up, baseball is a robber.

Some of the biggest profiteering political wars were fought in the early 1900s over playing baseball on Sunday.  Those who supported a Sunday sabbath instead of the real Sabbath were assaulted and defeated by those who wanted baseball on “the lord’s day”.  It was all about the money.

There was a time in many Protestant Christian denominations when they kept a day long Sunday sabbath earnestly trying to adhere to keeping the day holy in as much as they understood how.  Those Catholic daughters were the last vestige of rebellion against Rome but they eventually gave in and joined their mother in defaming even the incorrect sabbath day.

Baseball totally captivates many of its ardent fans who live every breath, every day to tally scores and statistics in private and in public and it controls the minds of the individual who idolize the players.  The worst part is what happens to young people who see their elders captivated by the game of baseball then they are assimilated into the sport, for life, and never have a chance to know YHVH God or His Word (Son/Messiah).

Many baseball fans and players get sucked into the false, man made, theological Christianity that allows them to merely believe in Jesus and do a few good things while on their sure, saved path to heaven and eternal life, all based on mere belief.

When they get to The Judgment, God’s Son will tell them to depart because he never knew them.  Matthew 7:21-23

They rejected living The Way he lived.

They wanted to play in the world…

Come out from among them!