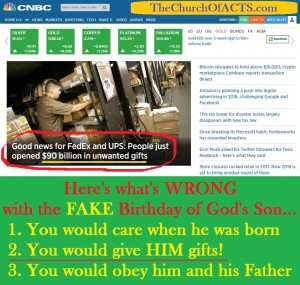 In the Beginning, Christianity’s Christmas was fake.   And The Word of God was nowhere to be found.

And the anti-Messiah’s were with the FAKE Unholy Day right through all recorded history!

Christmas was first forced on the People by the unholy Catholic Church in the early 4th century by the pagan Emperor Constantine.

Never mind there is ZERO basis in the Bible to celebrate Christmas in the ways Catholics started it.

And never mind there is ZERO basis in the Bible to celebrate Christmas the way modern Catholics and their Protestant daughters have continued it.

It is common knowledge of recorded history that the Catholics moved their celebration of the birthday of God’s Son from the Spring to December 25th to appease pagans and pagan rituals as they were indoctrinating in the false religion of Catholicism and Sun God worship.

When Martin Luther and followers split off from Rome they continued many of the pagan and anti-biblical traditions of Rome.  They disregarded the Words of God’s Son about false traditions and man made laws.

As so it is to this very day.

If you do not understand God and His Son absolutely hate and condemn the modern Christian celebration of Christmas then you have not read much of the Bible and what it says about idolatry and paganism and how God and His Son will judge those things and the people who do them.

Do yourself and your family a huge favor and get educated and abandon the things God hates.  Watch these short videos and do your own research and study:

And, by Norm Franz:

Learn how to keep God’s Commandments and live the Faith like His Son did.

Your salvation depends on it.