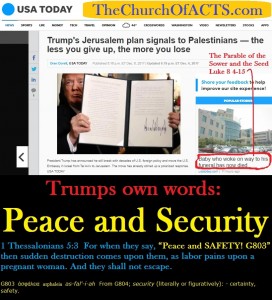 Prophecy fulfilled – and they will continue to say peace and safety.

Other events will happen in the course of the next 69 weeks that will shock the world to its very core.

Death warrants are being signed.  Those in Jerusalem are forcing things to an end and it is an end that will totally shock them when they realize it is because of them, and they have led millions to the slaughter, like sheep.  But it is not just those in Jerusalem though they are CHIEF.  It is all those who perpetuate false theologies of ways of man that justifies themselves with works/beliefs that are contrary to the Works of YHVH Elohim also known as His Charge.  The maze of endless religions, denominations, and sects that have all defied YHVH’s  simple Commandments and set apart life are coming to a bitter end.  They ate the SOUR GRAPES and they refused to humble themselves to YHVH God and His Torah.

We are approaching the day when YHVH slams the Door shut and the unwise virgins are left outside where in darkness there is weeping, wailing, and gnashing of teeth.  Rachel once again crying for her children only this time it is wailing to the four corners of the earth.

There will be a total economic collapse and an economic restoration to a cashless world and then the end will come with a FLOOD.  Daniel 9.

The cries of “PEACE AND SAFETY” – “PEACE AND SECURITY” will be uttered many more times over the next 69 weeks.

1 Thessalonians 5:3  For when they say, “PEACE and SECURITY!” then sudden destruction comes upon them, as labor pains upon a pregnant woman. And they shall not escape.

Donald Trump’s exact words in his speech were PEACE AND SECURITY.  That Greek word means SAFETY.  Trump’s words were carefully chosen by YHVH’s Spirit but I have no doubt The Donald does not have a clue as to what he is doing in the prophetic realm.

Already, the Turkish President Erdogen is calling for an Islamic Summit to be held in Istanbul on the Jerusalem issue:

That is a VERY BIG DEAL, prophetically.

My “guess” is Barack Obama is also readying for his future position as U.N. Secretary General (and President of the World) as the latest news shows he is jetting around the world meeting with heads of state in what many are saying is a direct violation of the Logan Act.

Quite some time ago, I began telling people in various places to watch as the 490 days (70 Weeks) were fast approaching.

The idea of 70 weeks was first published in recent years by Nathanael Kuechenberg and also Michael Rood.  Nathanael wrote a book called “As Jesus Walks – The Four Gospels In One” and Michael’s was named “The Chronological Gospels” and both laid out a 70 week ministry for Yeshua Messiah.  Others have followed suit.

So, long ago, I factored in the 490 days into my Last Days Spreadsheet and found the start date to be December 1, 2017

Nothing like starting the 490 days with a BANG is there?

One of the places I foretold the 490 days was at a somewhat popular YouTube channel where a husband and wife prophecy.  I came across them many years ago and they had declared they were prophesying until the September 23, 2015 date which is an extremely significant date at my website www.Daniels70thWeek.com  In fact, it was doing a Google search to find out who else if anyone had learned parts of Daniel’s timeline that I came across this couple and they call themselves “God’s Healer 7”.  After September 23, 2015 they announced they would prophecy until early April 2019, another date that is extremely significant.  It was doing a similar search that a few years later I found Nathanael Kuechenberg and his April 2019 date with destiny.

About a month ago, I made an obscure comment at Dan and Barbara’s YouTube channel and foretold there the coming 490 days and said significant things were going to happen and to watch:

Of course, at least until now, almost nobody knows my YouTube account of “Maybe SomedaySoon” but I did reveal it to those watching at their YouTube here:

We are fast forwarding to the ride of our lives, folks.

Those who are wise, who keep the Sabbath and all THE LAW, will understand.  And some will do exploits.

Those who are not wise will fail the Isaiah 56 tests.

1 Corinthians 14:8 For if the TRUMP G4536 makes an uncertain sound, who will prepare for battle?