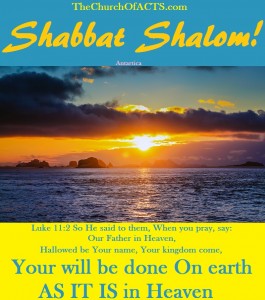 God’s Son said to pray for his FATHER’S WILL on the earth AS IT IS in Heaven.

Does ANYBODY, anybody at all really think the Sabbath is no longer kept in Heaven?

Do the billions of people who pray “The Lord’s Prayer” ever stop to think about what is the Father’s Will or what that prayer example really means?

If they did they would be avidly keeping the Sabbath Holy every 7th day and keeping His Feasts and seeking Him and His Will with all their heart, soul, mind, and strength to learn His Torah so they could know His Will.

Isn’t it funny how the whole “Lord’s Prayer” depends on YHVH God the Father’s Will ?

And it depends on what His Will is in Heaven.

And YHVH God the Father says Himself that He DOES NOT CHANGE!  (Malachi 3:6 and many other scriptures)

Everything Moses said and wrote was a copy of everything in Heaven YHVH God the Father showed Moses.

Exodus 25:40  And see to it that you make them according to the PATTERN which was shown you on the mountain.

Exodus 25:9  According to all that I show you, that is, the PATTERN of the tabernacle and the pattern of all its furnishings, just so you shall make it.

Acts 7:44-46  Our fathers had the tabernacle of witness in the wilderness, as He appointed, instructing Moses to make it according to the PATTERN that he had seen, 45 which our fathers, having received it in turn, also brought with Joshua into the land possessed by the Gentiles, whom God drove out before the face of our fathers until the days of David, 46 who found favor before God and asked to find a dwelling for the God of Jacob.

THE LAW Moses wrote is a copy of THE LAW in Heaven.  It is everlasting.  It IS the Father’s IMAGE.  Pure Righteousness.

All the utensils and furnishings of The Tabernacle Israel built are copies of those things in Heaven.

The copies have to be EXACT just like we are told to be an IMAGE, an EXACT COPY of God’s Son in all that he did.

And whether people who pray “The Lord’s Prayer” know it or not they are praying for Torah to be done on the earth even as Torah is done in Heaven.

If those same people are not keeping Torah then they are agreeing with their condemnation whether they know it or not:

Most people who pray this prayer are merely praying for what they want and how they want their lives to work out to their advantage.

Like the “forgive us of our sins” part they do not realize if they throw out the Father’s Torah and substitute their fake theologies then there is no forgiveness of their sins.  If they do not apply the sacrifice of Yeshua within his Father’s LAW then there is no forgiveness of sins because his blood has not been utilized as intended within Torah but used in the deceptions of their fake theologies.

That is WHY at the Judgment God’s Son tells them to depart because he does not identify the fake theological junk they make up and do.  Matthew 7:21-23

It is far better to DO what YHVH God and His Son say to DO than to show up at The Judgment having done what fake Christian theologies tell you to do and have The Son who is The Judge burn up everything you ever did.