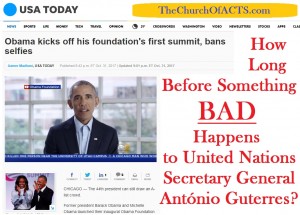 Barack Obama is not going away.  Not by a long shot…

In fact, he’s just getting warmed up for the main event.

Obama opened up his foundation this week and attracted big names around the world.

MANY have identified Obama as the anti-Christ (anti-Messiah) to come.  He has been identified through bible verse sequences, bible codes, Gematria, campaign symbolisms, speeches, etc  and the list seems endless.  Simple internet searches show the myriad of ways Obama has been identified.  Many of the mathematical identifications of Obama are impressive to say the least as some extremely sharp mathematical wiz kids have spent much time researching Obama far more so than any other figure in history.

No, he moves a few blocks from the White House.

He has been reaching out all over the world to leaders who identify with globalism, secularism, and what I call immoralism…

They know the type of world they want and it does not include any aspect of God’s Commandments.

To see other identification of Obama as anti-Messiah read here: