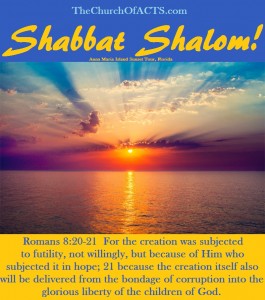 Isaiah 24:5  5 The earth is also defiled under its inhabitants, Because they have transgressed the laws, Changed the ordinance, Broken the everlasting covenant.

When one comes to YHVH and Torah (His Son), one of the first things they realize is all the CLEAN food LAW still applies and YHVH’s Son did not make unclean things edible.

Then, it should follow that polluting the earth is a grievous sin and a sin that we should run from like as if from a plague.

I have eaten virtually no fast food or processed food for about 12 years now and most of what we eat is organic.  Each month I grow increasingly dissatisfied with food in restaurants and we very rarely eat outside our house anyway.

But one thing I also notice is most restaurants do not recycle.  When I grew up, most restaurants created very little unrecyclable waste but the plastics and packaging industries have greatly changed that.  When I grew up, you went to restaurants where you sat down and ate from ceramic plates and with metal utensils and milk bottles were glass.  More and more restaurants get away from anything they have to wash as much as they can all in the name of cutting costs.  But, at what price to health?

I have noticed in many restaurants there are no recycling containers.  Sometimes I take the recyclables with me in a bag and recycle them later rather than putting them into their generic garbage container where they will all go into the landfills and those chemicals will show up once again in food, water, and air once they complete their cycles.

There are 3091 active landfills in the U.S. and over 10,000 old municipal landfills all leaching chemicals into the water tables, into underground aquifers, into rivers, and ultimately into the oceans.

Torah blatantly indicates everyone should recycle and not pollute.  Verses talk about burying human waste.

Chemical waste really did not exist in bible times but there are instructions to bury waste and YHVH created many organisms within the ground to handle the digestion of those organic wastes which complete the lifecycle.

I live in the middle of the MidWest in the middle of cornfields and soybean fields.  All these fields are virtually dead as far as worms and microorganisms go because farmers now pollute the land with chemicals which kill the worms and organisms which would, if not euthanized, recycle the land in a rich organic process.

Next time you are tempted to throw trash out your car window or discard garbage that is marked and should be recycled, just remember, it’s a sin and it is a type of sin that defiles the earth, harms the earth, and murders the earth.

Proverbs 25:26  A righteous man who falters before the wicked Is like a murky spring and a polluted well.

“Come out from among them
And be separate, says YHVH.
Do not touch what is unclean,
And I will receive you.”

Ezra 9:11  which You commanded by Your servants the prophets, saying, ‘The land which you are entering to possess is an unclean land, with the uncleanness of the peoples of the lands, with their abominations which have filled it from one end to another with their impurity.

It would take about 2 years or less to defeat both abortion and pollution.

But right now, The People are divided into separate political parties where nothing of significance ever gets done on any issue…

Stop polluting the land, join environmental causes, and introduce them to Torah!