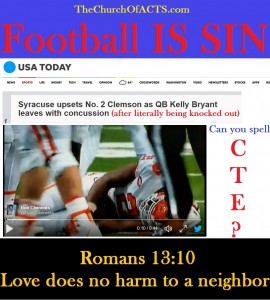 Is Football SIN?  Football is SIN if God’s Word means anything to you!

Football is a game/sport that does evil to competitors.

Proverbs 10:23  To do evil is like sport to a fool,
But a man of understanding has wisdom.

Anytime you harm someone without the express authorization in the Scriptures then you commit SIN.

Just because evil, sports profiteers and politicians legalize violence between countrymen does not make it legal in the eyes of God and His Son!

Football is a sport where many tens thousands of men, and even women now, are harmed physically and psychologically.

Most of this physical and psychological harm lasts a lifetime.

We can easily see hundreds of thousands of football players who have physical limitations because their knees are beaten to a pulp, or their backs are irreparably damaged.

Those players are instantly, physically limited in their service to God and their fellow man for the rest of their lives.

But the psychological/mental toll is something scientists are just now beginning to expose and make public.

CTE results from receiving hard hits and concussions and is well known to be the primary cause of multiple suicides among retired pro football players.  What a waste of life!

How can 100s of MILLIONS of Christians sit back and watch this extremely violent game as players destroy their health and mental well being?

How can 100s of MILLIONS of Christians sit back and watch and CHEER players as they commit the acts that lead to death, depression, permanent injury, and worse?

What is worse than death?

When you show up at The Judgment and God’s Son says you did not really know him and did not live the way he lived as your example and then you are told to depart into everlasting punishment.

Isaiah 5:20  Woe to those who call evil good, and good evil;
Who put darkness for light, and light for darkness;
Who put bitter for sweet, and sweet for bitter!

It’s time for Christians to get real about their faith and keep ALL of God’s Commandments not just the ones they feel comfortable with and like.

If you truly BELIEVE in God’s Son then you are commanded to live like God’s Son in all that you do.

Paul said we are to be the image of God’s Son in all our lives.

If you don’t live the way God’s Son lived then you don’t really know him and his Father.

And that is cause enough for rejection at The Judgment!