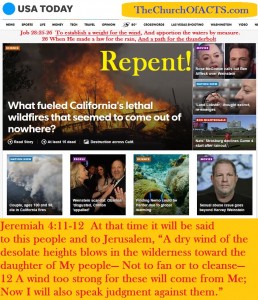 In California, they call the wind Diablo…

At Merriam Websters they define Diablo as devil:

I guess Californian’s don’t read the Scriptures or the dictionary much while they bask in the sun and follow Harvey Weinstein and the 1000s of celebrities those like him.

Or maybe because California is the most anti-Torah state in the country they just don’t care if they call YHVH God a devil.

The wind, the rain, the seas, the planets, the sun, the moon?  All move at the pleasure of YHVH our Father.

The winds this time of year, causing California to be so dry, come from the Northeast in Nevada deserts high above California.

The daughter of YHVH’s people have been playing the Harlot.

They have forsaken THE LAW of YHVH God the Father.

They have forgotten their Creator.

They have forsaken the Sabbath of their Creator and do not honor Him.

They ignore His Feasts (which are going on right now).

You think these hurricanes and a few wildfires are something?

Then, 2 Witnesses, will plague the entire earth, all at the same time, every hour, every day, for three and a half years.

I have it on good Word those 2 Witnesses will take the day off on the Sabbath and Feasts, in The Wilderness of Revelation 12 with the rest of their friends who comprise The Woman.

But outside The Wilderness, in the rest of the world, those plagues, once started, will march on continuously.  Some of the plagues will be short like category 5 hurricanes, massive 9.0 earthquakes, huge wildfires, blizzards with extreme cold, tsunamis, and huge tornadoes.

But other plagues will be long lasting and similar to Ebola and as long as the bacteria remain alive the inhabitants of the earth will not rest.

Outside The Wilderness The Offspring of The Woman has been left to get it right, for a change, while they are tested to see if in the face of horror they will keep the Commandments of YHVH.

And you thought the destruction, and torture of atheists, God haters, and murderers was the purpose of Revelation?

The Great Tribulation of 1260 days plus a few extra days is about testing those Offspring of The Woman who came to the table of YHVH and His Son but they decided to walk another way in the false religions of Christianity, Judaism, and Islam while they held hands with The World and played the Harlot.

To obey is surely better than sacrifice…

Now, those in false religions will be tested along with those who claim Sabbath and LAW but are disobedient to Torah in seemingly  smaller ways as well.  Those who make allowances to disobey the Sabbath and its simple written rules/guidelines will be left outside The Wilderness of Revelation 12, as well.  They will be out there with the Torah deniers in false religions and with the wicked who hate God/Elohim completely.

Obedience is better than sacrifice.

God’s Son was here to teach us how to obey and “go and sin no more”.  It is not optional.

And for those who tend to keep disobeying (BOTH BIG AND SMALL), God’s Son has provided the free gift of his sacrifice to be substituted into Torah and used exactly the same way as the sacrifices in THE LAW.

But for those who cut corners and still disobey even if they think it is only a tiny bit?

Their remedy is found outside The Wilderness of Revelation 12.

To obey, go and sin no more, is definitely far better than to keep sacrificing.  Just ask the prodigal son’s brother!