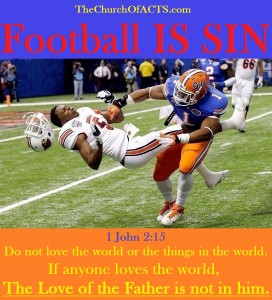 It does not matter how you package football because according to the Bible, football is sin.

The Hollywood movie industry and the Christian movie industries make hundreds of movies that will move you to tears and you’re your emotions around all the while attempting to justify violence against their fellow man.

The Satanically led and crafted Christian movie industry tries to get you to believe God is some way, shape, or form endorses football.

Yes, every Christian football movie you have ever watched is nothing more than a Satanic deception to get you and other people to engage in the lust of violence either actively or passively.  The Bible calls that SIN.

These Christian movie industry executive and producers should try searching the Scriptures once in a while and holding up what they produce to sell to the masses and contrast how Jesus/Yeshua lived his life in the True Faith.

All over God’s LAW violence against one’s fellow man is SIN.

True believers are expected to live in peace (shalom) and harmony with no only fellow believers but also with non-believers.

No one can scripturally compare football with biblically authorized government police, and military who in the course of serving their local, state, or federal government may have to use violence to protect the citizens.

Absent protection of citizens and enforcing judgments for lawbreakers, violence against people is no where condoned in all the Bible.

In fact, in the story of Lazarus and the rich man, the rich man is condemned to everlasting punishment because he did not take care of the beggar Lazarus’ needs.  If such a simple violation condemns a man to everlasting punishment how much more do you imagine the punishment will be for engaging in the violent sport of football where hundreds of thousands of young men are injured, many permanently, every year, for the rest of their lives?

Not taking care of the poor and hungry is an unforgiveable sin in the Bible/Torah.  It condemns people and society.

Romans 12:18  If it is possible, as much as depends on you, live peaceably with all men.

Acts 7:26  And the next day he appeared to two of them as they were fighting, and tried to reconcile them, saying, ‘Men, you are brethren; why do you wrong one another?’

Romans 13:10  Love does no harm to a neighbor; therefore love is the fulfillment of THE LAW.

You cannot legalize the breaking of THE LAW and expect to survive The Judgment.

At The Judgment, when the books are opened, everyone who broke THE LAW and never repented to keep all THE LAW are condemned to everlasting punishment.

There is no sacrifice for the willing participation in sin.  Hebrews 10:26

Live like God’s Son lived otherwise there can be no expectation of eternal life.  Revelation 22:14