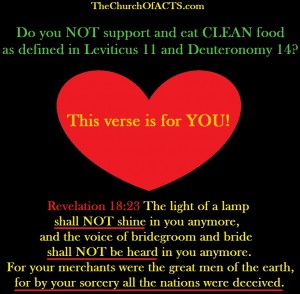 Do you practice sorcery?

Most people in the religion of Christianity and Judaism do practice and support sorcery…  And most do not even know it.

Sorcery is mentioned 4 times in the book of Revelation and that makes it a leading sin that sorcery and all those who practice sorcery will be destroyed during or just after the 1260 day Great Tribulation.

But Revelation 18:23 is particularly interesting because it is describing people who had God’s Spirit in them and since they decided to support the sin of sorcery He removed His Spirit from them.  That is what He does when they reject keeping His Commandments, just like he did to Samson.

But Samson repented and came out of his sin…

Revelation 18:23 also equates sorcery with the merchants of the earth.

That means they are selling sorcery products!  It is a business.  And it is a HUGE business and it is all around you.

This is big time business, folks, and recognized directly in the book of Revelation because it is all around you, RIGHT NOW.

Sorcery is obviously all the chemical and pharmaceutical industries to which we have all been exposed and damaged and they currently represent the BIGGEST industries on the face of the earth today.

The use of deadly chemicals is so pervasive in virtually every facet of everything we buy that it is difficult to build a life apart from deadly sorcery.

But, if we are going to obey God’s Commandments we are called, just a few verses earlier in the same chapter, to come out of this Harlot of Revelation creation.  If you do not come out, you will share in her destruction.

Cancer, and hundreds of seemingly incurable auto-immune diseases, and many other deadly health issues are the direct result of chemically laced food, water, air, environment, and product manufacturing.

All of these chemical sorcery companies were born out of primarily Christian theologically based countries whose theologies are against the Commandments of God given the children of Israel and allows for the use of deadly chemicals in every facet of life.

Look at the country homes of the biggest offending companies who control all types of chemical enterprises and they are a Who’s WHO list of Catholic and Protestant Christian countries that allowed these sorceries to come alive and to take place, grow, and gain economic advantage over all the world – Germany, France, United States, Italy, Spain, UK, and many others…

Those originally Christian theologically based countries gave birth to the sorceries of Revelation by virtue of claiming freedom from God’s CLEAN food Commandments and virtually all His LAW.

And yes, I included Judaism/Israel in this list as if you do a simple search you will find Israel to be the home of several horrible chemical and genetically modifying companies exporting their filth all around the world.

As individuals, we have to come out and do away with those things in our lives and then reach out to the society around us.

That eliminates almost all processed food as it is all full of health destroying chemicals.

That eliminates the majority of everything you can purchase at a grocery store as even the chicken, beef, and fish are mostly chemically grown and processed.  Virtually all the vegetables in a grocery store are made UNCLEAN by chemicals.

YHVH God did NOT create chicken, cows, fish, and vegetables with those UNCLEAN chemical sorceries!

The meat makeup of a chemically grown and processed chicken is far different from the meat of a free range organic chicken.

It is absolutely STUNNING to see and taste the difference.

Christian Theologies and Judaism theologies are what allowed for the degradation of CLEAN food into obviously UNCLEAN food.

What do you do?

Start eating organic NOW, grow organic vegetables in your backyard, buy and slaughter real CLEAN free range organic meat at a fraction of the price you pay for UNCLEAN meat in the grocery stores, and finally, get involved politically to bring change.  If you are not involved in solving the problem then you are part of the problem…

We have all been suckered into believing Global Food, chemical, and pharmaceutical companies are good and care about our health…

No such thing can ever be true in any way, shape, or form, as long as they do not produce true CLEAN food and turn their back on UNCLEAN food.

It is all just an economic, chemical game to control and subdue the lives of all the people, their economic welfare, and health.

Don’t be a slave of the Beast system of Revelation.

21 And they did not repent of their murders or their sorceries or their sexual immorality or their thefts.

23 The light of a lamp shall not shine in you anymore, and the voice of bridegroom and bride shall not be heard in you anymore. For your merchants were the great men of the earth, for by your sorcery all the nations were deceived.

8 But the cowardly, unbelieving, abominable, murderers, sexually immoral, sorcerers, idolaters, and all liars shall have their part in the lake which burns with fire and brimstone, which is the second death.”

15 But outside are dogs and sorcerers and sexually immoral and murderers and idolaters, and whoever loves and practices a lie.