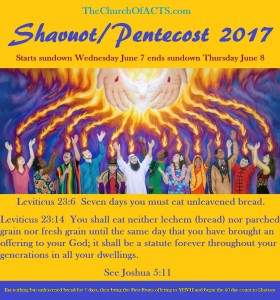 People differ on their counting the “omer” to Pentecost/Shavuot.

However, there is widespread agreement on not eating ONLY unleavened bread for the 7 days of the Feast of Unleavened Bread…

Why is there widespread agreement?

Because disobedience comes easy as does ignorance.

Sometimes disobedience combines with ignorance to create an easier, wider road rather than the freedom of the narrow path of Torah.

That is what has happened to the celebration of the Feast of Shavuot.

Ever wonder WHY Acts 2:1 is mostly translated “fully come”?

Because even back then there was disagreement on which exact day for when to keep Shavuot.

There are various words in the Greek for the word meaning “come”.  But in Acts 2:1 the author uses the Greek word sumpleroo.

Luke 23:33  33 And when they had come G565 to the place called Calvary, there they crucified Him, and the criminals, one on the right hand and the other on the left.

But in Acts 2:1 sumpleroo is used and here also is the definition:

You see, there is a very good reason for “fully come” in Acts 2:1 and that is because from the time the commandment was given to eat only unleavened bread for 7 days, people have been trying to disobey the commandment, for various reasons.  Many people who say they keep The Sabbath view unleavened bread as merely a side item on their sumptuous meal plates during the Feast of Unleavened Bread.

Unleavened bread is not a side item.  It is the ONLY item!

What is very telling is the wording of Leviticus 23:14  There is a reference to bread but it is a different bread, not unleavened bread.  This bread is something called in Hebrew “lechem”.

That means Leviticus is SEQUENTIAL exactly as it is written!

And for those who will say the 7th day of Unleavened bread is not a Sabbath?  Read THE LAW of The Sabbath again, these are days to be kept HOLY and a HOLY convocation is to be kept.  That is what a Sabbath IS.

That is the way it happened coming out of Egypt and that is what the scriptures teach that they had no time to prepare food so all they have was their dough in bowls and wrapped in clothes on their shoulders so the dough could not get leaven from the air and begin the fermentation process.

What is also interesting is Joshua 5:11 is a direct reference right back to Leviticus 23:14 and the commandment to eat unleavened bread ONLY:

Joshua 5:11  And they ate of the produce of the land on the day after the Passover, unleavened bread and parched grain, on the very same day.

On the daytime after Passover, it is still technically Passover until sundown.  That afternoon is when the theologically incorrect Pharisees and High Priests ensured the True Messiah The Living Torah was slain and they did this according to their poor understanding of THE LAW.  Messiah ate the Passover with his disciples the evening before exactly as it is written.  It is just the daytime  or “morning” of the day of Passover which began at sundown on the 14th, then Passover twilight begins, then darkeness, and the vigil.  The lamb, if they had lamb, and they probably did since they left Egypt 40 years before with massive amounts of animals was completely gone by morning but they can still eat of the produce of the land on Passover morning and they are still allowed to eat parched grain because the Feast of Unleavened Bread does not begin until sundown…

So, the commandment is totally consistent in Joshua 5 as given in Leviticus 23:14 and other places.

Then something amazing happens, they walk around Jericho for 7 days!

Now, what do you think they were eating during those 7 days?

So, in summary, the counting of the days to Shavuot begins after The Sabbath, the 7th Day of the Feast of Unleavened Bread.  Some might even call it the 8th day.  Then the sheaf is waved, an offering made and the count begins.

How many things can you think about that are special in the scriptures with regard to the 8th day or the number 8?

After 7 millenniums, there is The Judgment and THEN AND ONLY THEN is the New Covenant.

James 1:18  Of His own will YHVH (He) brought us forth by Torah (the word of truth), that we might be a kind of firstfruits of His creatures.

What did Yeshua do on the 8th day after his death and why then?

Why would Yeshua, after rising from the dead, let no one touch him (except for his feet) until after he ascended?

When will people stop their nonsense and keep the real Feast of Unleavened Bread the correct way?

Isn’t a few thousand years long enough and lesson enough to seek YHVH and His Righteousness and do it the right way?

When people start keeping the Feast of Unleavened Bread the correct way then they will be able to clearly see the benefit of keeping Shavuot when it is FULLY COME…!

At this point, it would be ridiculous to have to explain to anyone why Yeshua had to fulfill the Days of Unleavened Bread BEFORE he ascended and assumed his duties will all power and authority in heaven where he was transferred all the duties of the Levitical Priesthood, just as Hebrews tells us happened, and where Yeshua serves in the Melchizedek Priesthood and is The Judge in the final Judgment and mediator through judgment of what Torah they did or DID NOT DO, of all people who are judged Righteous and Blameless and allowed to enter into the New Covenant of The New Jerusalem in the 8th Millennium…

The rest, those who did not keep Torah righteously and blamelessly will perish into everlasting punishment.

Shavuot/Pentecost is rarely on the day pagans call Sunday and YHVH’s Son certainly did NOT rise from the dead on that day.