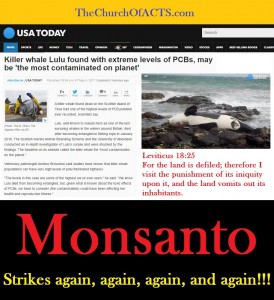 The earth’s seas are dying…

Bees around the world are dying…

Birds around the world are dying…

Here, we see a killer whale highly contaminated with PCB’s thanks to Monsanto Company headquartered in St Louis, Missouri.

Most people do not even know what PCBs are:

Most people seem not to care about their personal health and well being and are content to proceed in life sucking up deadly chemicals in the food, water, vaccines, air, and being the slaves of network TV, cable TV, and immoral lifestyle changing movies, music, and video games.

The people of the world are about to be held accountable for how they have polluted the earth and violated YHVH God’s Commandments.

Leviticus 18:25  For the land is defiled; therefore I visit the punishment of its iniquity upon it, and the land vomits out its inhabitants.

People of false Christian Theologies are some of the biggest polluters and defenders of pollution in the world.

There is no hope of salvation once a person has been sucked into Christian Theology and rejects keeping the Commandments of YHVH God the Father and His Son.  It is very rare that any of them repent of their sins and change to keep God’s Commandments.

Freedom to pollute is NOT a liberty brought about by God’s Son!

The perpetrators (theologians), liars, and followers of the false religion of Christianity are about to be dealt with the penalties for their sorceries:

Revelation 9:21  And they did not repent of their murders or their sorceries or their sexual immorality or their thefts.

Revelation 18:23  The light of a lamp shall not shine in you anymore, and the voice of bridegroom and bride shall not be heard in you anymore. For your merchants were the great men of the earth, for by your sorcery all the nations were deceived.

Revelation 21:8  But the cowardly, unbelieving, abominable, murderers, sexually immoral, sorcerers, idolaters, and all liars shall have their part in the lake which burns with fire and brimstone, which is the second death.”

Revelation 22:15  But outside are dogs and sorcerers and sexually immoral and murderers and idolaters, and whoever loves and practices a lie.

They have no right to the Tree of Life as Revelation 22:14 shows us.

The polluters of the world are known in the Bible as sorcerers.

They include all makers of harmful chemicals and the people who use them and defend them, their blind followers.

We see clearly the catastrophic results of lives bathed in chemicals and the cancers, multitude of auto-immune diseases, and endless other health destroying diseases.

All this is done intentionally at Satan’s crafty direction.

It is done to control and bring the people of the world into slavery and gain dominion over them, by the world Elite who own and totally control all the world’s largest Global Corporations and virtually every government.

Those who willingly participate in the pollution of the world will not escape their everlasting death in the Lake of Fire.

Belief in “jesus” cannot save them because they openly reject obeying the Commandments of him and His Father YHVH.

Their belief is not true biblical belief, at all.

Their belief is a satanic deception carved right out of Genesis 3:1 “has God indeed said…”

And everything goes downhill from there…

God’s Son said he would do absolutely nothing to change THE LAW and The Prophets.

Yet, the false religion of Christianity claims God’s Son did EVERYTHING to change His Father’s LAW and The Prophets…

Who ya gonna believe?

YHVH God the Father and His Son who said THE LAW is forever and everlasting?

Or are you going to believe the false, man made, theological, satanic “son of god” created by Christian Theology?

The choice is yours…

To obey is better than sacrifice…