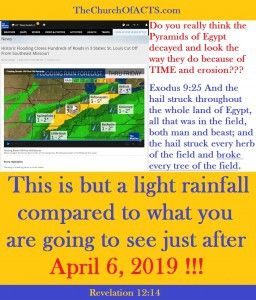 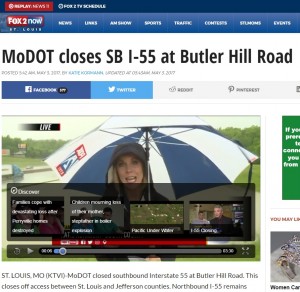 Every time I see a picture of the pyramids of Egypt and also see “historians” and “archaeologists” trying to date things based on erosion and decay, I at least laugh inside if not out loud.

They do the same false thing with the Grand Canyon…

Here, we have YHVH God the Father’s massive floods wrecking 100,000s of thousands of people’s lives in 3 states and no one says a thing about WHY.

Imagine what those hailstones did to the pyramids and other structures in Egypt but NOT ONE THING is mentioned about those structures.

In Revelation, the hailstones are described as the weight of a talent and a little research shows they might be from 80 to 125 lbs based on which talent measurement is used.  They are massive and would break a huge free in half easily.  Imagine what they did to the buildings and monuments and pyramids in Egypt…!

The movie “The Ten Commandments” came out in October 1956 and shows us this magnificent Egypt and Pharaoh having his son and Moses building his structures to his glory.  We rewatched the movie recently and virtually every scene in it has contrary biblical facts in it.  But, of course, there is truth in the movie as well.  Sadly, most people who watch this movie are not Bible literate enough to know all the falsehoods that are portrayed in the movie.  And I am not talking about unbelievers who are Bible illiterate, I am talking about Christians, Mulims, and those in Judaism.

As Pharaoh’s chariots leave for the Red Sea we see a picture of a magnificent Egypt and its buildings.

Broke every tree.  Not merely missing some leaves…  Total devastation.

There was FIRE mingled with the hail…

So, what was not destroyed by the hail was burning up as well.  Buildings, animals, possessions…  Everything.

In the movie, we see Pharaoh gingerly stepping around the fire on his rooftop deck and moving away from the tiny little hailstones gathering there.

We simply do not get a remotely real picture of what happened to Egypt.

And the historians do not want you to get the real view.

Is it any wonder “archaeologists” are still digging up things there like the recent huge statue discovery?

Egypt was in ruins almost as if an atomic bomb had gone off there but you do not see that in the movie.

What you do see in the movie is all Egypt’s army drowning in the Red Sea as about a hundred feet of water comes crashing down onto them.  All of them except Pharaoh who stayed behind (LOL) and drove by himself back to Egypt and his queen.

In this recent flood and there are several more days of rain to come, St Louis has been CUT OFF from South East access on I44.  Hundreds of roads are inaccessible and in Arkansas levees are failing and this is not even remotely close to the devastation Egypt suffered.

And all this devastation is not even remotely close to what is going to happen for about 1260 days beginning April 6, 2019, if my calculations and a few other’s calculations are correct.

ALL who do not keep The Sabbath and ALL THE LAW will be CUT OFF according to the prophecies.

YHVH Elohim’s LAW does not change.

YHVH’s Son said several times he would not change it.

Exodus 31:14  You shall keep the Sabbath, therefore, for it is holy to you. Everyone who profanes it shall surely be put to death; for whoever does any work on it, that person shall be CUT OFF from among his people.

Numbers 15:31  Because he has despised the Word of YHVH, and has broken His Commandment, that person shall be completely CUT OFF; his guilt shall be upon him.’”

Folks might want to read all the instances in the Scriptures about “CUT OFF”.

Yet, these are the Commandments of the Most High Creator of Everything.

Revelation 8:7  The first angel sounded: And hail and fire followed, mingled with blood, and they were thrown to the earth. And a third of the trees were burned up, and all green grass was burned up.

Revelation 11:19  Then the temple of God was opened in heaven, and the ark of His covenant was seen in His temple. And there were lightnings, noises, thunderings, an earthquake, and great hail.

Revelation 16:21  And great hail from heaven fell upon men, each hailstone about the weight of a talent. Men blasphemed God because of the plague of the hail, since that plague was exceedingly great.