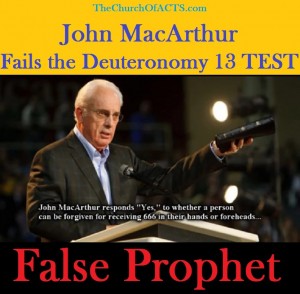 A while back, “grace” teacher John MacArthur made the statement a person could take the mark of the beast during the Tribulation and still be saved…

This cause an uproar and eventually MacArthur apparently recanted his statement.  Maybe.

The debate continued to roar and as it turns out many leading celebrity Christian “teachers” hold the same opinion that one can take the mark of the beast in the Tribulation and still be saved.

Basically in their reasoning they tried to second guess the scriptures and find PATHS which are instances the scriptures appear not to cover and under certain circumstances the individual might be able to free themselves of the mark of the beast and return to Christ.  Another circumstance was put forth by MacArthur that born again Christians in the Tribulation could take the mark in order to have food to eat and they would be okay because of their belief.  I guess they are sort of fooling Satan and the Beast of Revelation, huh?  (with YHVH God’s approval…?)

People like John MacArthur do not recant.  They are already sold out to their false religion/theology and have replaced God’s Son in the Bible with a theological “god’s son” of their own making.  They merely tell the people they have recanted.  The very idea of them recanting is sort of like the wisest person on the earth saying the sky is light blue when it is actually dark blue but they have made their case for light blue because they are convinced there is another darker shade of blue.  All they do is give people the BLUES.  LIES.

Hear MacArthur at about 50 seconds into the video:

MacArthur takes a position DIRECTLY OPPOSED to the written scripture in Revelation:

Revelation 14:9-10  Then a third angel followed them, saying with a loud voice, “If anyone worships the beast and his image, and receives his mark on his forehead or on his hand, 10 he himself shall also drink of the wine of the wrath of God, which is poured out full strength into the cup of His indignation. He shall be tormented with fire and brimstone in the presence of the holy angels and in the presence of the Lamb.”

This is not something MacArthur thought up over breakfast coffee and sausages prior to his speech.  This is a long thought out position based on many decades of his “ministry”.  I place ministry and other terms in quotes when they are suspect.

This makes John MacArthur the epitome of a biblical false prophet, BY DEFINITION.

We go to Deuteronomy 13 to see the definition:

Deuteronomy 13  If there arises among you a prophet or a dreamer of dreams, and he gives you a sign or a wonder, 2 and the sign or the wonder comes to pass, of which he spoke to you, saying, ‘Let us go after other gods’—which you have not known—‘and let us serve them,’ 3 you shall not listen to the words of that prophet or that dreamer of dreams, for YHVH your God is TESTING YOU to know whether you love YHVH your God with all your heart and with all your soul. 4 You shall walk after YHVH your God and fear Him, and keep His commandments and obey His voice; you shall serve Him and hold fast to Him. 5 But that prophet or that dreamer of dreams shall be put to death, because he has spoken in order to turn you away from YHVH your God, who brought you out of the land of Egypt and redeemed you from the house of bondage, to entice you from the way in which YHVH your God commanded you to walk. So you shall put away the evil from your midst.

ANYTHING spoken by ANY PERSON which would cause you to break one single Commandment no matter how big or small that Commandment seems is indicative of the presence of a false prophet.

You see the requirement for a True teacher is FIRST that the teacher Does keep all the Commandments of YHVH and His Son and only then should that person possibly be considered to rise to the level of a teacher that should instruct even the least among us.

Many scriptures from Matthew to Revelation and from Genesis to Malachi tells us there will be MANY false prophets, particularly in the last days, which we are in right now.

They are in Christian churches, Jewish and Messianic Synagogues, Messianic Assembly/Churches, Hebrew Roots assembly/churches – they are everywhere.

Somewhere along the narrow path to Salvation, called THE LAW, teachers decided to rise up, form teaching ministries rather than True Assemblies/churches, and go after the path to stardom and celebrity…

Almost all of them are false prophets…

In my life, I have examined many dozens, perhaps hundreds of teachers and found less than a handful that I would recommend to anyone.  In the Messianic world the more I examine the more I find the willingness to side step many of YHVH’s plain Commandments and that is severely disturbing.  Many people never examine what the teacher that teaches them says to see if what they say is exactly what The Torah allows and even far less examine the teachers to see if they are living their lives keeping those Commandments and even less will confront a teacher if they find them not to be keeping or teaching to keep those Commandments. Sometimes people just want to fit in and not cause problems.  But the real problem is when we take a step off the narrow salvation path of THE LAW to do ANYTHING contrary to THE LAW.  That creates a massive problem for us with our Father YHVH in heaven…

My hope and prayer is my friends who read this will spend the majority of their time NOT listening to teachers but in reading the Exodus thru Deuteronomy Scriptures over and over and over again to prove for themselves EXACTLY what is expected of them and their families, friends, and assemblies, and yes, their teachers.