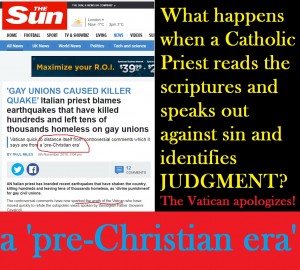 The Roman Catholic church readily identifies itself as a non-Biblical church.

Their writings do not even attempt to claim otherwise.

They change the definition of sin at will and claim the right to do so.

They abolished THE LAW of YHVH God the Father when no authority exists in the entirety of the Bible to do so.

They changed the Sabbath of God and His Son to SUNday and then abolished a 24 hour sabbath on the false day.

The only thing that awaits the Catholic church and her followers who stay in her and do not leave?

The Lake of Fire after The Judgment.

“Father Cavalcoli’s comment led to his suspension from the Catholic station, and also elicited an unprecedented condemnation from the Vatican in the person of Archbishop Angelo Becciu, sostituto (deputy) to the Secretary of State and someone close to Pope Francis.

Yes, retribution came from one of the Harlots of Revelation to one of her priests!