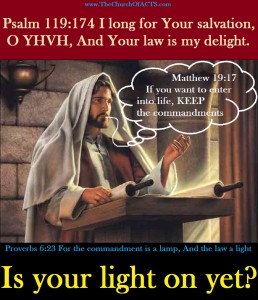 Do you ever wonder why those who set up Christianity set up a religion that completely ignores what God’s Son said?

In Matthew 19:17 Messiah says point blank if you want to enter eternal life then keep the commandments of YHVH God his Father and he lists a few of them.

And even earlier in Matthew God’s Son says he would never change His Father’s LAW:

Matthew 5:17  “Do not think that I came to destroy the Law or the Prophets. I did not come to destroy but to fulfill.

God’s Son even goes so far as to tell us when it would be possible that YHVH God’s LAW might change:

Matthew 5:18  For assuredly, I say to you, till heaven and earth pass away, one jot or one tittle will by no means pass from the law till all is fulfilled.

So, heaven and earth has to pass away, and just before that everything is fulfilled…

So WHY did those who set up Christianity set up a religion NOT BASED on God’s Son’s words?

WHY did they ignore God’s Son?

WHY do they say God’s Son made it so no one has to keep God’s LAW?

WHY do they not teach to seek YHVH God’s Righteousness?

WHY do they not correctly teach how to enter into eternal life?

Could it be they set up a FALSE religion?

Could it be they have fooled almost everyone?

Could it be they intentionally lead the people astray (just like the Pharisee’s, priests, and scribes did in Yeshua’s time?)