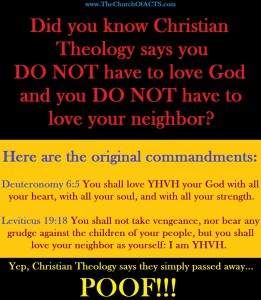 Ever hear someone say “we’re Christian and Jesus died for us so we do not have to keep God’s LAW anymore!”

That is just like saying THE LAW that says “You shall not murder” is gone and you do not have to keep it anymore.

When they asked God’s Son what is the greatest commandment in THE LAW, the answer was from God’s LAW.

Yeshua (Jesus) answered them the greatest commandment is to love god with all your heart, soul, and mind and he was quoting the Scriptures from Deuteronomy 6:5

The book of Matthew certainly had not been written yet.

Then God’s Son said the second greatest commandment is to love your neighbor as yourself and he was quoting the Scriptures from Leviticus 19:18

So where does the idea believers do not have to keep God’s LAW come from…?  Christian Theology.

Something else Christian Theology says is believers do not have to keep YHVH God and His Son’s 7th Day Sabbath.

Isn’t it strange that theologians make up the idea that you don’t have to keep God’s LAW out of God’s Son’s quotes from God’s LAW?

Getting confusing isn’t it?

Seems like they draw the lines where they want to draw them, not based on anything logical.

Something else God’s Son said in that conversation:

Matthew 22:40 “On these two commandments hang all the Law and the Prophets.”

Okay, so if ALL THE LAW and the Prophets hang on the 2 greatest commandments in THE LAW how in the world are we supposed to keep those 2 commandments if theologians say God’s Law is gone?

Are we supposed to do away with all the Prophets as well?

But aren’t they “hanging” on THE LAW?

Do you see the illogical, slippery slope of Christian Theology yet?

After a short while they do not make sense at all.

God’s Son also quoted this:  “It is written, ‘Man shall not live by bread alone, but by every word of God.’” and he was quoting the Scriptures from here:

Deuteronomy 8:3  Man shall not live by bread alone; but man lives by every word that proceeds from the mouth of YHVH.

So what do these Christian theologians think we should do, get rid of all God’s Words in His LAW?

Might as well throw out all the prophecies if we throw out THE LAW the Prophets hang onto, huh?

Are you starting to realize there is SOMETHING BAD WRONG with Christian Theology?

You guessed it, their slippery slope leads straight to disobeying God and eventually to the lake of fire…

Only those who keep God’s LAW enter into heaven, according to what God’s Son says about His Father’s LAW:

Revelation 22:14-15 Blessed are those who do His commandments, that they may have the right to the tree of life, and may enter through the gates into the city. 15 But outside are dogs and sorcerers and sexually immoral and murderers and idolaters, and whoever loves and practices a lie.

Keep God’s LAW and His 7th Day Sabbath and you’ll have right to the Tree of Life!