The first Exodus story was an amazing tale of Israelites being rescued by YHVH, Moses, and Aaron, led through the desert to the Red Sea, and crossed 9.6 miles of ocean bed on dry ground over to Arabia and they turned around and watched the armies of Pharoah as their chariot wheels came off, their horses stopped and the waters, up to over 1000 feet high above them came crash down upon them and killed all the Egyptians, including Pharoah.

Ron Wyatt and others have dived at the location and found coral in the shapes of chariot wheels, axels, chariots, horse hoofs, and human bones at the crossing site on the East side of the Sinai Peninsula at Aquba:

The first Exodus is told in Exodus 12.

There is a second Exodus coming soon in just a few years and the prophetic story of it is told in Revelation 12.

The man who leads the second Exodus is the same as the first Exodus, Moses.  We last saw Moses at the end of Deuteronomy where YHVH buried him and no one knows where.

Daniel gives this account of the man he saw in Daniel 10:

Daniel 10:13-14  13 But the prince of the kingdom of Persia withstood me twenty-one days; and behold, Michael, one of the chief princes, came to help me, for I had been left alone there with the kings of Persia. 14 Now I have come to make you understand what will happen to your people in the latter days, for the vision refers to many days yet to come.”

Daniel 10:21  21 But I will tell you what is noted in the Scripture of Truth. (No one upholds me against these, except Michael your prince.

And we see this in Jude:

Jude 1:9  9 Yet Michael the archangel, in contending with the devil, when he disputed about the body of Moses, dared not bring against him a reviling accusation, but said, “The Lord rebuke you!”

It is clear Michael come to Moses’ defense, after Moses’ death!

Then the man Daniel saw does something that is very typical of just one man in all the Bible:

Daniel 12:7  7 Then I heard the man clothed in linen, who was above the waters of the river, when he held up his right hand and his left hand to heaven, and swore by Him who lives forever, that it shall be for a time, times, and half a time; and when the power of the holy people has been completely shattered, all these things shall be finished.

To further understand the Second Exodus, we go to Revelation 12:

Revelation 12:6  6 Then the woman fled into the wilderness, where she has a place prepared by God, that they should feed her there one thousand two hundred and sixty days.

This wilderness is a physical location on the earth:

Revelation 12:14-16  14 But the woman was given two wings of a great eagle, that she might fly into the wilderness to her place, where she is nourished for a time and times and half a time, from the presence of the serpent. 15 So the serpent spewed water out of his mouth like a flood after the woman, that he might cause her to be carried away by the flood. 16 But the earth helped the woman, and the earth opened its mouth and swallowed up the flood which the dragon had spewed out of his mouth.

And notice a very important fact in verse 14 that THE SERPENT cannot go to this physical location on the earth!

The scriptures describe Satan as the prince of the power of the air but here is a physical location on the earth that he cannot go to?

How does YHVH do that?

But who is The Woman?

We know Mary gave birth to Yeshua (Jesus) and here it describes The Woman as having given birth to Yeshua.  So who was Mary?  The scripture says this about her:

Luke 1:30  Then the angel said to her, “Do not be afraid, Mary, for you have found favor with God.

In the “Old Testament” favor is given to those who merit it by keeping the commandments of YHVH Elohim (God).

If we look at the Hebrew, the word used for grace is:

We know YHVH well enough to know those who please Him are those who keep His commandments.

But, if we look at the Hebrew, we get a far different picture of how “chen” is used: 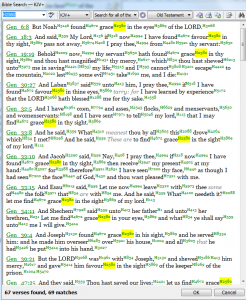 So, it is very obvious the “Old Testament” understanding of “chen” is merited favor for keeping the commandments of YHVH.

So, in the “New Testament” when we get to Luke and the story of Zecharias and Elizabeth it says about them:

Luke 1:5-6  5 There was in the days of Herod, the king of Judea, a certain priest named Zacharias, of the division of Abijah. His wife was of the daughters of Aaron, and her name was Elizabeth. 6 And they were both righteous before God, walking in all the commandments and ordinances of the Lord blameless.

So, Mary was favored because she was righteous and blameless just like Elizabeth and Zecharias!  These folks understood clearly YHVH does not change and His commandments, the instructions for righteousness, must be kept.  The blameless side comes in when one does make an unintentional mistake and they need to repent and offer the sacrifice for forgiveness and carry out a statute is necessary, according to YHVH’s Law.

So, The Woman in the Second Exodus is highly favored just like Mary, Zecharias, and Elizabeth for being righteous and blameless.

In verse 17, Satan is enraged that he cannot kill The Woman nor can he go to where she is so he goes after her offspring.

To understand that, read the parable of the 10 virgins and keep an eye out for a future article that reveals who they are.