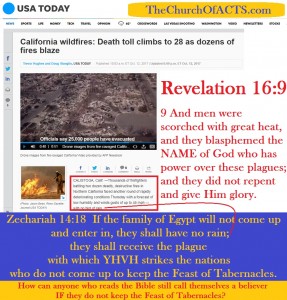 There is ONE LAW.  There is no separate set of rules for Gentile Strangers!

Exodus 12:49  One LAW shall be for the native-born and for the Gentile (stranger) who dwells among you.

False theology has permeated all the earth and the earth is defiled under its inhabitants.

Theological Christians, Muslims, and those in Judaism lack even the most basic abilities to think and see, reason and understand.

The reason for this is described in Isaiah 29.

Those who do not want to obey all YHVH God the Father’s Commandments willingly step into varying degrees of blindness and it is YHVH Himself who applies the supernatural blindness in brains/hearts.

Zechariah 14:18 is AFTER the Day of YHVH (the LORD) and keeping the Feast of Tabernacles is REQUIRED of all peoples on the face of the earth (just like it is now).  Nothing changes.

Pagans are those who reject keeping YHVH’s LAW which He gave to the children of Israel, which the vast majority of them also rejected most of the time and still reject Him and His LAW.

Some stupid theologians actually believe they will keep Tabernacles in the New Millennium but they are exempt from it now.  Yes that is actual theology, folks.   Straight from the mind of Satan, himself.

How can any intelligent, logically minded, semi-educated, Bible literate person read Zechariah 14:18 and think they are exempt from keeping the Feast of Tabernacles?

Isaiah 29:11  The whole vision has become to you like the words of a book that is sealed, which men deliver to one who is literate…

All people who disobey YHVH’s Commandments are blinded by YHVH Himself because they love disobedience most than they love Him (and His Son, The Living Torah).

To obey is better than sacrifice and all who reject keeping THE LAW of YHVH reject Him and His Son.  They do not know them.

They traded in YHVH and His Son for false theological beliefs and ways.