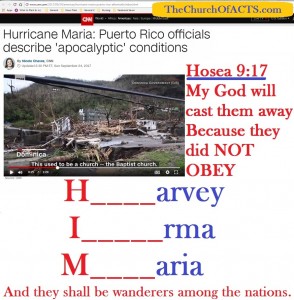 Puerto Rico was pretty much obliterated by Hurricane Maria.

Are a few people crying out to God?  Yes.

Hosea 9:17  My God will cast them away,
Because they did not obey HIM;
And they shall be wanderers among the nations.

But most people just bemoan their condition and their circumstances when they cry out to God or His Son rather than searching inwardly and corporately to find if there are wicked things in them and the way they live that are in violation of YHVH God the Father’s Commandments that need to be dealt with so they can become eligible to receive help from on High and so they can be heard calling on the NAME of YHVH God the Father and His Son.

To call on the NAME of YHVH (and His Son), you must be in right standing with Him and keeping His Commandments and you are on the narrow path to salvation.  You might not be keeping every commandment perfectly but that is your goal.

If that is not your goal then you are not in the Faith.

We are instructed by Paul to conform ourselves to the image of God’s Son.  The Scripture tells us that God’s Son was the image of YHVH God our Father.  Those whose goal is to become just like God’s Son are the only people in the TRUE Faith.

Those who are into religions where their goals do not include keeping the Father’s Sabbath, Feasts, and all His LAW have fallen into false religions and cults, and are in need of once again learning the basic tenets of the faith and repenting fo those false ways.

Puerto Rico is a quite corrupt country.  PR was already financially destitute before hurricane Maria came by now PR is desperate and articles say millions might leave.  Many hundreds of thousands of Puerto Ricans have already left as their economy has been in tatters for a long time, jobs are scarce, and the future bleak for families and their children.

They are becoming wanderers among the nations…

But for all the death, wailing, and tears in PR, most people had great opportunity long before they were $70 billion in debt and long before hurricane Maria came along but they ignored the opportunities in lieu of living the way they want to live and doing the things they want to do rather than searching the Scriptures day and night and meditating/studying on YHVH God’s Commandments and humbling themselves with fasting and prayer to seek God’s Will and conform themselves to the image of God and His Son.

I have spent weeks in Puerto Rico and it is easy to see most people there do not live by God’s Word and consider conforming themselves to the image of God’s Son to be anathema to how they intend to live their lives.

That is sad because all the answers to life are within the Scriptures if only a person decides to live by Psalms 1:1-3

Most of Puerto Rico is Catholic.  And most Catholics spend every little time in The Word of God, and it is the same state with most Protestant Christians as well.  Both sides of the House of Christianity generally reject deep study of the Scriptures and generally reject strict adherence to God’s Commandments.

God’s Son instructed all people who seek salvation to seek His Father’s Righteousness.

That means keeping His Father’s Commandments.

That means keeping the Sabbath Holy.

That means keeping the Feasts of YHVH.

That means living according to the biblical diet.

That means holding fast/keeping all THE LAW of YHVH God the Father as The Way of Life just like it says in Isaiah 56.

That means making your life to look exactly like the life of God’s Son.

No wonder there are so many hurricanes, tornadoes, earthquakes, natural disasters, crimes, disease, etc…

Not many people out there conforming themselves and they way they live to the image of God’s Son.