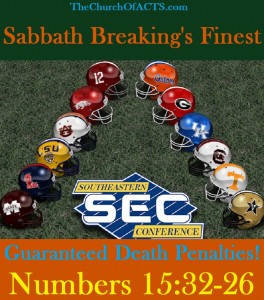 Everywhere we look, we see in the news where the sport of football, at all levels, has embraced and even politicized ungodly lifestyles which are against God’s Commandments.

No person who believes in God should have anything to do with the sport of football, absolutely nothing.

No person who plays, watches, supports, or works in football or football related businesses can ever expect to enter the Kingdom of Heaven because they are living a life supporting violence that is totally contrary to the life we are told to live in the Scriptures and God’s Son says to follow him and be his image and anything remotely related to football is not in the image of God’s Son.

It is that SIMPLE and the Scriptures absolutely speak against gratuitous violence, which is SIN, done to any human being.

Football is an anti-God sport.

Football is a sport that thrives on breaking God’s Commandments.

Football is an anti-biblical sport.

Football is a Sabbath breaking sport.

Football is an anti-Christian sport.

Football is an unholy sport right from the very beginning.

Football is a peace/shalom hating sport.

Football is a pro-violence sport.

There is absolutely NO WAY to justify the sport of football in the Scriptures.

There are no valid heroes in football, only victims.

We see dozens, maybe hundreds of Christian football movies which glorify gratuitous violence.  These movies are carefully crafted to get to the heart of the viewer and make them think they see God in the people playing football when in fact they are watching Satan cause people to abuse other people and millions of fans to shout on the indulgence of flagrant abuse and violence towards other human beings.

The victims are the players, the fans in attendance, and all the millions of fans who watch, especially the children.  God will judge them all by His Law.

Football is so violent many injuries are not even known and thanks to modern pathology we now know hundreds of thousands perhaps millions of football players are far more than injured physically for life they are injured mentally for life and do not realize it.

We now know many of these criminals are also victims of violence and brain damage which can easily cause them to break laws and harm people away from the game many years after they stop playing, and harm their own children and families.

You will hear people you know, who say they believe in God and His Son, shouting “Go Tide, Go Wildcats, Go Gators, Go Tigers, Go Razorbacks” all football season long.

They are not true believers in God or His Son – they are unrepentant sinners indulging in gratuitous violence done to their fellow human beings that God Himself created.

Thus says YHVH, “I gave you life and health and your neighbor life and health, but you took my gifts and destroyed them according to your own passions and lusts and walked in your own ways and rejected My Ways”.

All through the scriptures it speaks against violence…

Matthew 18:6-7  “Whoever causes one of these little ones who believe in Me to sin, it would be better for him if a millstone were hung around his neck, and he were drowned in the depth of the sea. 7 Woe to the world because of offenses! For offenses must come, but woe to that man by whom the offense comes!”

Mark 9:42  But whoever causes one of these little ones who believe in Me to stumble, it would be better for him if a millstone were hung around his neck, and he were thrown into the sea.

Luke 17  Then He said to the disciples, “It is impossible that no offenses should come, but woe to him through whom they do come! 2 It would be better for him if a millstone were hung around his neck, and he were thrown into the sea, than that he should offend one of these little ones”.

Romans 13:10  Love does NO HARM to a neighbor; therefore love is the fulfillment of the law.

1 Peter 3:13   And who is he who will HARM you if you become followers of what is good?

And God the Father Himself says:

Leviticus 19:18  You shall not take vengeance, nor bear any grudge against the children of your people, but you shall love your neighbor as yourself: I am YHVH.

The blood of victims is on the hands of all who support football and its endless array and levels of physical violence and hatred.

How many teachers in churches do you see teaching this message?

Ignorance of God’s Commandments and ignorance of the way we should live our lives in the image of God’s Son is NO EXCUSE at The Judgment of all souls.

And a guy named Moses said this:

Daniel 12:1-2  And at that time your people shall be delivered,
Everyone who is found written in the book.
2 And many of those who sleep in the dust of the earth shall awake,
Some to everlasting life,
Some to shame and everlasting contempt.

People who watch and play football will wake up to the total shock of their lives!

It is not possible in the Scriptures that anyone who watches or plays football shall awake to everlasting life if they do not repent, mourn their willing sins, and pray YHVH God the Father forgive them – then go and sin no more.

Revelation 22:14  Blessed are those who do His commandments, that they may have the right to the tree of life, and may enter through the gates into the city.