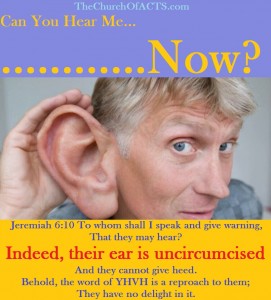 Do you have an uncircumcised ear?

Apparently most of those in the religions of Christianity, Judaism, and Islam DO have uncircumcised ears…

Islam has many references to the Torah Scriptures and Sabbath in their Quran but they refuse to even consider obeying those verses in their writings.

Judaism gives endless mention of the Torah Scriptures in its writings but hold the oral handed down mutterings of Rabbis to have more weight than the written Torah of YHVH.

Christianity in almost all cases rejects most of the Torah and “old testament” Scriptures and virtually deletes 2/3 of their Bible as having no meaning in their elitist theological pursuits unless they can interpret simple verses outside of God’s LAW.  They reject 1000’s of scriptures for those reasons.  Doesn’t it seem strange to you that a religion based on God’s Son would turn 180 degrees around and reject themselves living the way God’s Son and the Apostles lived their lives?  That is what happens when you let theologians run your life and church!

Messianism, or The Way as Paul called them, was the true faith seen in the book of ACTS in Paul’s writings.

The Way was a return to the ancient paths which Judaism had rejected in favor of oral rabbinic mutterings they called “oral torah” which is simply man’s made up rules and regulations.

Judaism, better known as “making it up as you go along” is what was nailed to the cross:

Colossians 2:14  Having wiped out the handwriting of requirements that was against us, which was contrary to us. And He has taken it out of the way, having nailed it to the cross.

The Way is the true faith.

The others I mention are impostors better known as false religions, or as James called them VAIN:

James 1:27  Pure and undefiled religion before God and the Father is this: to visit orphans and widows in their trouble, and to keep oneself unspotted from the world.

The only Way to keep oneself unspotted from the world is to keep The Sabbath and all God the Father’s Commandments.

That is what the TRUE FAITH actually IS.

That is what God’s Son lived his life by and did.

The life of God’s Son is the best example of true faith there is.

He lived his life keeping The Sabbath, the Feasts, and all THE LAW therefore he was the image of God the Father.

And Paul writes to be conformed to the IMAGE of God’s Son:

James 1:27  Pure and undefiled religion before God and the Father is this: to visit orphans and widows in their trouble, and to keep oneself unspotted from the world.

The ONLY Way to keep oneself unspotted from the world is to keep ALL the Commandments of God the Father just like His Son did.

It is actually very easy IF you live a set apart life.

Why do Christianity, Judaism, and Islam ignore the true faith of God’s Son and how God’s Son lived the True Faith?