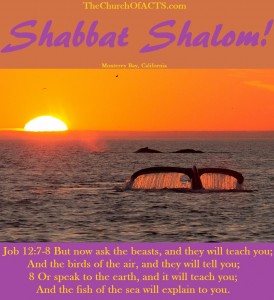 When the books are opened on The Judgment Day, there will be many witnesses against the unrighteous.

The Scriptures say the stars are witnesses, the earth is a witness and so on and so forth…

Animals deprived of rest on The Sabbath will be witnesses as the books are opened and the false religions which do not keep The Sabbath are seen causing animals to be deprived of their just rest and relief from humans on The Sabbath and they are also deprived of living a CLEAN life on the earth, with dignity as man polluted the earth and treated the animals with disrespect.

Those humans who have not kept The Sabbath and lived according to THE LAW of YHVH God the Father will be dispensed with Torah (Messiah)  judges them and they are told to depart from him because he never knew them.

They will shout at him claiming they did great things “in his name”.

He will then respond to them that “in his name” means in the authority of the Torah (THE LAW) of his Father, of which he is the Living Torah, and that they disobeyed him in thousands of ways and that he never knew them.

They will complain that they followed theologians who taught them to disobey and he will ask them why they chose not to eat the Bread of Life by obeying Torah to follow him instead of theologians who wasted their lives explaining why THE LAW Messiah said he would not change got changed anyway and does not have to be obeyed.

Messiah will say to these Christians, Islamists, Judaizers, and others “did you not see all the wars, murdering, rape, lying, Sabbath breaking, adulteries, and other evil acts and simply read my Father’s LAW and know obedience to His LAW solves ALL those sins?”

They will reply “we did not see you…”

Matthew 25:44-46  “Then they also will answer Him, saying, ‘Master, when did we see You hungry or thirsty or a stranger or naked or sick or in prison, and did not minister to You?’ 45 Then He will answer them, saying, ‘Assuredly, I say to you, inasmuch as you did not do it to one of the least of these, you did not do it to Me.’ 46 And these will go away into everlasting punishment, but the righteous into eternal life.”

They will insist they loved him, their Messiah…

He will ask them WHY they did not keep his commandments?

To this they will have no response.

Romans 3:19  Now we know that whatever THE LAW says, it says to those who are under THE LAW, that every mouth may be stopped, and all the world may become guilty before God.

Romans 7:1  Or do you not know, brethren (for I speak to those who know law [man’s law, Judaisms]), that THE LAW has dominion over a man as long as he lives?

Matthew 25:46  And these will go away into everlasting punishment, but the righteous into eternal life.