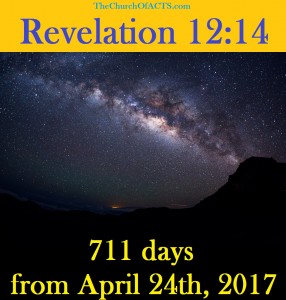 So, things have happened in recent days to cause me to post this warning tonight.

Until I got home from the sound studio, I did not know the math of today’s date.  I had not plugged it into my spreadsheet to see what I could see.  Sometimes many days pass before I configure the current date and check it.  I usually only do that at His Spirit’s leading…

I maintain an intricate spreadsheet based on the foundation dates of the 2 articles at www.Daniels70thWeek.com

There are not many people able to calculate these things or many who will take the time and effort, as well as the prayer, fasting, and desire, to know the keys to unlocking the sealed documents that Daniel was instructed to seal in Daniel 12.  Many try but most of them reject keeping The Sabbath and THE LAW.

With each passing month and year, I seem to be given more of the keys and the confirmations.

However, at this time, I choose to share with only a few, some of the intricate calculations based on the scriptures and some based on recent current events nationally, internationally, and some simply within my own life’s path and pertaining to that path that show we have mere days remaining until the event of Revelation 12:14 which thrusts the entire world into the 1260 day Great Tribulation which Daniel the Prophet wrote about and which millions/billions have anticipated for about 2500+ years.

I believe I have been given almost all the keys now.

But my decision is to share them at an appointed time, not of my own choosing, although it is my free choice to do so.

What I know more than anything else now, is people tend to continue to do what people want to do rather than seeking YHVH God the Father’s Will for their lives.  Seeking the Will of The Father involves taking Matthew 6:33 seriously as if lives and eternity depended on it and seeking YHVH’s Righteousness, to the very fullest, each and every hour we live.

Not many people are willing to give up their fun in the world to do those things.

The chosen FEW (aka The Remnant) are the ones who decided Righteousness was all that mattered in this life and they found the secrets to eternal life and perfection in keeping the Torah Commandments of YHVH God, the ONE and ONLY Elohim.  There is no other.

So, I could give out what I have been given but The Righteous have already made the full decision to DO Rigthteousness.

What about the unrighteous?

What about the wicked?

They are going to get their chance when true Watchmen start blowing the horns and sounding the alarms when given the facts.

They will need to become convinced, then repent, then seek YHVH’s Righteousness, THEN DO IT.

In Revelation 12:14, The Woman (The Righteous and Blameless) go into The Wilderness for 1260 days while the foolish virgins try to stay alive outside The Wilderness at the hands of The World and its leader who seek to hunt them down and mark them.

I have told a hand full of people what all these things represent but I have told no one all the keys to verify the authenticity of what I say.

What good would it do to try to put together all the facts if a person is unwilling to seek YHVH’s Righteousness, keeping His Sabbath and ALL THE LAW He gave to the children of Israel?

So, until I get a green light to reveal all that I know, people will have to rely on the 2 articles and try to configure Daniels 70th Week on top of that if they are going to see when things happen…

And they DO happen in about 711 days!

But, The Righteous, as Revelation 22 says, have nothing to worry about: