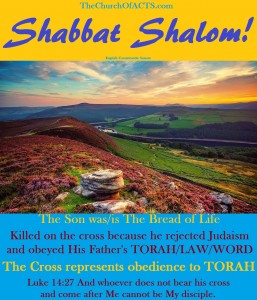 Philippians 2:8  And being found in appearance as a man, He humbled Himself and became obedient to the point of death, even the death of the cross.

What was found in the appearance of a man?

Deuteronomy 18:15-19 tells us YHVH said he would create a man like Moses and put His WORDs into that man…

That man became our Messiah or The Living Torah/WORD/LAW/VOICE/COMMANDMENTS as some prefer.

We, who are true believers, are commanded not to change His WORD at all.  True believers don’t.

He says He does not change His WORD.  Ever.

His Son was His Word and said he would NOT change YHVH’s WORD/LAW/VOICE/TORAH/COMMANDMENTS.

My friends (rea reya) are you getting the picture yet?

This sunset begins the weekly Sabbath and the 3rd day of the Feast of Unleavened Bread.

During the Feast of Unleavened we eat only unleavened bread cakes.

The scripture says they left their homes in Egypt without provisions – no other food except the dough for baking the unleavened bread cakes.  No other food.  Those Israelite’s understood clearly they would eat nothing else.

They walked from where they were in Egypt to Succoth where on Day 1 of Unleavened Bread where they had a Holy Convocation and they baked unleavened bread CAKES.  Those unleavened bread cakes are pretty much like bricks, very dense, highly nutritious, and compact.

They probably baked their unleavened bread cakes in their clay or metal covered kneading bowls.

We have a cast iron pot with a wire metal handle attached.  Yesterday, we put the dough into the pot and took it out to our campfire and used my staff to place it on the wood in the fire.  It got a little too hot but we ate 2-3 meals from that cake.  They probably just placed the bowl onto a rock at the side of the fire where it would easily get enough heat to bake the dough quickly and not burn.  We videoed everything and tomorrow or the day after will do it again with video and post it.

It was pretty neat.

We here in the West find things like that strange but it was standard practice back in those days and is still standard practice at my wife’s family home in the Philippines.  She knows how to do all this stuff we consider survival stuff.

The cross is a stumbling block BECAUSE it represents obedience to TORAH.

17 For Messiah did not send me to baptize, but to preach THE LAW (the gospel Hebrews 4:2), not with wisdom of words, lest the cross of Messiah should be made of no effect.

18 For the message of the cross is foolishness to those who are perishing, but to us who are being saved it is the power of God.

“I will destroy the wisdom of the wise,
And bring to nothing the understanding of the prudent.”

20 Where is the wise? Where is the scribe? Where is the disputer of this age? Has not God made foolish the wisdom of this world? 21 For since, in the wisdom of God, the world through wisdom did not know God, it pleased God through the foolishness of the message preached to save those who believe. 22 For Jews request a sign, and Greeks seek after wisdom; 23 but we preach Messiah crucified, to the Jews a stumbling block and to the Greeks foolishness, 24 but to those who are called, both Jews and Greeks, Messiah the power of God and the wisdom of God. 25 Because the foolishness of God is wiser than men, and the weakness of God is stronger than men.

See?  It (THE LAW/Gospel) is foolishness to the Gentiles (Greeks)…