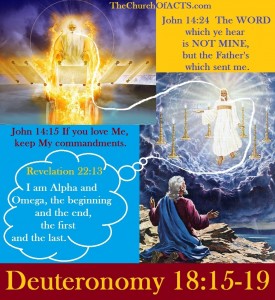 The fundamental understanding and concept of who and what God’s Son actually is is all but lost in the world’s religions.

In Deuteronomy 18:15-19, God lays out the framework from which His Son would be constructed and understood.

God’s Son is a man/prophet like Moses and YHVH God Himself puts His Words that are His Voice into this man/prophet and calls him His Son.

God’s Son even tells us in John 14:24 that the words he speaks out of his mouth are not his own words but are the words of His Father.

In Revelation 22:13 and other places, we see God’s Son still, long after his death, fulfilling his creation attributes from Deuteronomy 18:15-19

We see YHVH STILL speaking through the mouth of His Son.

It is YHVH who is the Alpha and Omega, beginning and end, first and last, and there is no other Elohim:

Isaiah 41:4  Who hath wrought and done it, calling the generations from the beginning? I YHVH, the first, and with the last; I AM He.

Isaiah 44:6  Thus saith YHVH the King of Israel, and his redeemer YHVH of hosts; I am the first, and I am the last; and beside me there is no God.

Obedience to YHVH’s WORD, i.e. His Voice, i.e. THE LAW is what redeems us:

Numbers 3:51  And Moses gave the money of them that were redeemed unto Aaron and to his sons, according to the word of YHVH, as YHVH commanded Moses.

The ENTIRE POINT of God having a Son is so that the people would obey YHVH’s Commandments and be reconciled to Him through THE LAW He gave to the children of Israel.

The adults who followed Moses and YHVH out of Egypt did not appreciate THE LAW spoken and written by Moses.

All of them died in The Wilderness except for a very few.

But their children, who saw the massive death of their parents and their parents folly, disobedience, and unbelief – learned their lesson!

The children of the DEAD parents renewed The Covenant, with Moses, before entering into the Promised Land, Israel.

They kept THE LAW all the days of Joshua and the elders who outlived Joshua and THEY WERE VICTORIOUS!

But, succeeding generations wavered from keeping THE LAW and endured great hardship.

THE LAW i.e. The Word, i.e. The Voice of YHVH in the mouth of His Son is the only reaon YHVH God sent His Son.

THE LAW administers reconciliation of sinners to YHVH through sacrifice.

THE LAW judges unrepentant sinners who are not reconciled to YHVH and places them in the Lake of Fire.

YHVH put THE LAW in His Son and now His Son is qualified to be The Judge.

YHVH put THE LAW in His Son and now His Son is qualified to be the mediator of the New Covenant we see in Revelation 21.

Those who pass enter into the New Covenant AFTER The Judgment.

All who live on the earth must pass The Judgment before they can enter into the New Covenant.

Paul said as much in Romans 7:1

Failure to grasp the fundamentals of who and what Messiah, God’s Son IS results in false practices that we read throughout the ENTIRE Bible results in death and eternity in the Lake of Fire.

We see disobedience to Torah loud and clear in Acts 5 don’t we?

Disobedience to Torah leads to death and is exactly the same as disobedience to God’s Son because YHVH God put His Torah perfectly into His Son and made obedience to The Torah in His Son the Righteous dividing line between life and death.