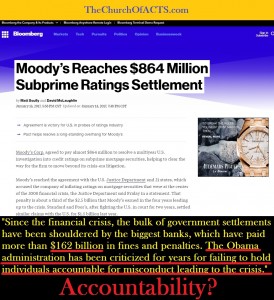 These fines come nowhere close to repairing the damage done to the people who lost homes and lives due to the greed of the Big Banks!

Rating’s agencies Moody’s and Standard and Poor’s should be out of business and the damage they did far exceeds their net worth.

They gave great ratings to the very bottom of the bucket securities that fueled the Big Banks GREED.

Proverbs 20:10  Diverse weights and diverse measures, they are both alike, an abomination to YHVH.

Revelation 9:21  And they did not repent of their murders or their sorceries or their sexual immorality or their thefts.

There is no salvation for anyone in heaven, no matter how much they believe in “Jesus”, if they cheat, steal, rob, or lie to anyone in the course of business.

Un-repented sin is a disqualifier for salvation.

Salvation is the FAVOR (some call it grace) that YHVH God and His Son give to a person who keeps YHVH’s Commandments.

Christian theology solved the problem of cheating and robbing in business by simply doing away with the requirement to keep God’s Commandments.

Christian Theology has made a mockery of YHVH God’s LAW and trampled His Son (Torah in his body) underfoot.

Hebrews 10:29  Of how much worse punishment, do you suppose, will he be thought worthy who has trampled the Son of God underfoot, counted the blood of the covenant by which he was sanctified a common thing, and insulted the Spirit of FAVOR?

Theft was and is the modus operandi for the Catholic and Protestant worlds throughout history in their operations of business and in their dealings with The People.

People do not realize just how thorough the plagues and judgments are going to be when the prophecies of the Revelation are happening all around them.

Problem is, those goats get to The Judgment and Matthew 25:31-46 tells us the rest of the story…