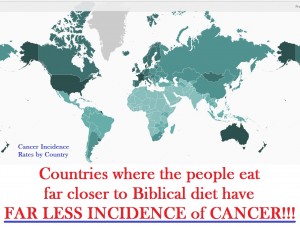 Notice on the ALL INCIDENCE map equatorial countries have far less cancer incidence.

Notice how countries where the people get more Vitamin D the cancer rates are far less.

Muslims eat a closer to a biblical diet than any other people on the earth as nations and consequently have the smallest cancer rates, as a religious people.

We see clearly as 3rd world nations begin to develop and adopt Western, chemical diets their cancer rates go up.

The most likely place to eat a non-biblical diet is in a Western Christian nation.

The most likely place to GET CANCER is in a Western Christian nation.

The most likely place to die of cancer is in a Western Christian nation.

Because Western Christian nations, as a whole, thumb their noses at eating Biblical diets and live a lifestyle contrary to the Commandments of God and His Son.

Notice Israel has higher cancer incidence rates than almost all of its Muslim neighbors!

That is because even Israel, as a nation, does not eat as biblically clean food as their Muslim/Islamic neighbors.

How do we know this?

Just do a little study of agriculture in Israel and you will find they have adopted anti-biblical chemical farming and GMOs thus, as a nation, thumbing their noses at YHVH God and His Commandments to eat CLEAN natural food that He, YHVH, created.  In fact, Israel is one of the leading research and development countries in the area of GMOs. chemicals, and biotech’s.

You don’t have to look far:

You don’t have to look far…

Monsanto is alive and very well in Israel:

And you thought Israel cared about YHVH God The Father’s Commandments?

Where did you get that idea from…?

So, we can easily say, as far as Biblical diet, that Muslims keep dietary Torah better than the people in Israel, as a whole.

The numbers do not lie. 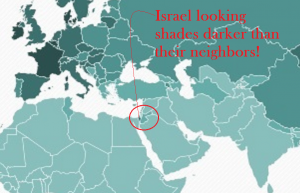