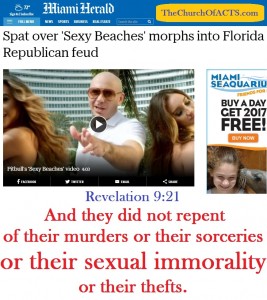 The vast majority of all Republicans are pro-abortion and don’t even know it…  Yet.

But the argument is not over the illicit sex video, its over money and whether that much money should be spent and paid to Pit Bull.

Most people will never hear the lyrics of Pit Bull’s song “Sexy Beaches” used in the video because most music advocating illicit sex, drugs, and crimes is intentionally produced in order to cover up illicit lyrics with a strong rhythmic beat that grabs the attention of young and old alike and people enjoy the “music” never knowing the full extent of the lyrics and what is being fed to them until their morals are torn down to the point they do not care.  Here are the lyrics: http://www.metrolyrics.com/sexy-beaches-lyrics-pitbull.html

And that is the state of the union of most Republicans, they simply do not care unless the issue happens to be a buzz word like abortion then it certainly is not in vogue for them to take opposition for convenience’s sake.

How can I say such things?

Well. hundreds of millions see a video like this and millions or hundreds of thousands of women will flock to Florida and seek pleasure as the tune suggests, find it, and get unfortunately pregnant in the heat of passion then turn to abortion as a way to get rid of the problem.  This exact scenario is played out hundreds of thousands of times, perhaps millions of times a year not just in the U.S. but all around the world.  Man and women go around humming to catchy tunes with underlying lyrics that literally transform their behavior and often times they don’t even realize it until it is too late.

There is a lone pro-abortion Democrat hollering at the Republicans that the video promotes “sexualization and degradation of women”.  How ironic.

Maybe she should become a Republican and reform the Republican Party in Florida?

In closing, if the behavior you promote leads to a sin on the part of somebody else then, in the Court of YHVH God our Creator and His Son, you also are held liable.  If the sin by that person leads to murder, like abortion, you are indeed held liable for that murder at The Judgment.

That is the lesson of Joshua 7 and various other places in the Scriptures.

Everyone with a copy of the Scriptures is held responsible to the lesson of Joshua 7 whether they are interested in it, OR NOT.

Most of them act as if those scriptures do not even exist.

Why take a really Holy stand out in public where you might indeed be ridiculed and actually persecuted, huh?

What a novel thought…