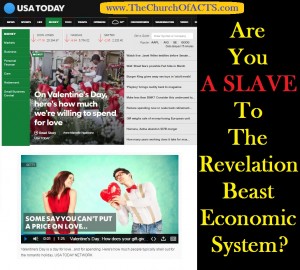 Are you a slave to the Revelation Beast Economic System and don’t know it?

The book of Revelation chapter 13 makes it crystal clear the Revelation Beast Economic System is throughout the entire world and controls virtually everything, all buying and selling in all the economies of the world.

So, the mark of the Beast has not been instituted yet but the system is definitely in place and we all are surrounded by it by carefully controlled consumerism which has indeed made slaves of the masses already.

We see right in front of us the technology to effect such a system in the very near future!

This system is instituted in ALL THE WORLD not merely the Middle East.

It is very important to understand the Hebrew word for worship so when you read text translated from Greek to English or another language you understand what is being communicated.

H7812    שָׁחָה  shâchâh  shaw-khaw’  A primitive root; to depress, that is, prostrate (especially reflexively in homage to royalty or God): – bow (self) down, crouch, fall down (flat), humbly beseech, do (make) obeisance, do reverence, make to stoop, worship.

This is why the act of taking the mark of the beast is so anathema to YHVH God and His Son because the taking of the mark will forever establish the individual as belonging to the Beast system and there is no return from it.

I believe firmly the mark of the Beast is an implanted microchip that will utilize the energy of the human body to bathe the subject’s brain will constant radio wave frequencies and messages which will cause the individual to do things and say things in total allegiance to the Beast government that formulates those radio waves for its specific purposes in the taking of a worldwide census to mark every individual as human OR “something else”.  All individuals who ultimately refuse the mark, after much attempt at indoctrination into the Beast system, are considered “something else” and then beheaded.

Some have attempted to identify the mark of the Beast as letters signifying Islamic characters.  They are absolutely incorrect and I have already told you WHY.

Islam has a stated goal to take over the world through population growth in foreign nations and they are well on their way to attaining that goal with the percentages of their people growing higher every year.  But at present rates of their growth, it would take several hundred years for them to attain high enough percentages in targeted countries so they would be able to overthrow democracies, socialist states, and communist states in either legal voting constitutional change OR armed insurrections.

That simply will never happen for hundreds of years.

The Global Economic technological framework is already in place for the mark of the Beast.  The technology to control individual through a tiny chip implant is already a reality and growing stronger every year with the advent of smaller and smaller, more powerful microchip processors as well as stronger and stronger Wi-Fi systems throughout the world.  Right now Wi-Fi systems are the market driven implementation of government sponsored paths of the future.  But, if governments suddenly through hundreds of billions into the process, there would be no place on the earth to escape the broadest Wi-Fi bandwidths.

I am also convinced some of the mass murders we have seen have been accomplished through secret agencies testing these implantable microchips right in front of our eyes for all the world to see.

My understanding of this technology is so firm I have even recorded a song about the mark of the Beast and it will be released very soon!

Give true LOVE through YHVH God’s Commandments 365 days a year not just on cue as ordered by the Revelation Beast Economic System.