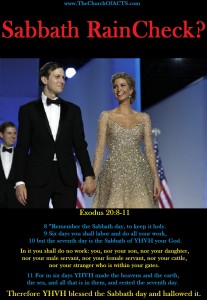 YHVH God the Father gives no one, absolutely no one, a Sabbath raincheck.

But exactly what did she convert to and what is she being led by?

(understand, I really am pleased Donald Trump was elected as President of the USA over Hillary Clinton but that does not move the real issues aside even for a Friday night’s inauguration moment, and does not mean YHVH God accepts what is going to happen any more than as James says there is no shadow of turning in YHVH the Father, James 1:17.  Trump now needs to fulfill his promises or face the outcry of the people)

If you are in a false religion that adds to OR takes away from THE LAW of YHVH God the Father then you can expect some trouble to come your way.  Trouble is a given.  Curses are a given.

Judaism took THE LAW given to the children of Israel by YHVH God and proceeded to pollute it with all sorts of false rules, laws, regulations, ordinances, and requirements that are NOT WRITTEN in THE LAW.

Judaism, for instance, says not to eat meat and cheese together.  There is nothing remotely close to that in the Scriptures but they changed the fact it is disrespectful to boil a kid in its mother’s milk and changed it into something altogether different.

There are hundreds of more where those came from…

The current nation of Israel does not live at peace within its own borders!

The current nation of Israel does not have peace with its neighbors!

Isaiah 48:18  Oh, that you had heeded My commandments!
Then your peace would have been like a river,
And your Righteousness like the waves of the sea.

Deuteronomy 29:19  and so it may not happen, when he hears the words of this curse, that he blesses himself in his heart, saying, ‘I shall have peace, even though I follow the dictates of my heart’—as though the drunkard could be included with the sober.

But Israel did not keep the Commandments of YHVH, at various times, and they paid the price of curses and are still paying that price to this very day.

And to this very day YHVH God’s Commandments, THE LAW He gave to the children of Israel IS NOT THE LAW of this nation of Israel.  They cannot even keep the Sabbath in Israel as a country!

Take a look at this article from September 2016:

Why not all 20?  Political and economic pressure.

Judaism is like that and makes allowance to special situations to violate THE LAW of YHVH God.  They make special laws to violate the 7th Year Sabbath rest for the land as well.  And MANY such things they do…

It should come as no surprise in a few short years when Zechariah 13 is fulfilled and we see Israel invaded and destroyed and only 1/3 of the people remaining alive.  It is WRITTEN.

Wisdom is given freely in the Proverbs but I think most people, particularly those people in Israel, ever read the Proverbs:

Proverbs 16:7  When a man’s ways please YHVH, He makes even his enemies to be at peace with him.

That is a PROMISE!

In the history of Israel when they kept the Sabbath and kept all THE LAW, YHVH gave them peace with their enemies…

And nowhere in the world is the opposite of that PROMISE more noticeable than in the nation Israel NOW.

It is as if they LIVE TO DISOBEY the Sabbath and THE LAW of YHVH God.

And Christianity does the same, exact things but in different and various ways!

That is what false religions are all about and how you know them from the REAL THING.