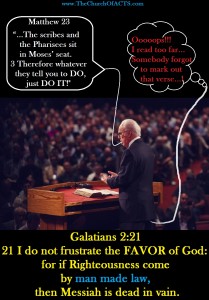 If one actually studies all the scriptures in the Bible where the word commonly believed to be “grace” is used then they unavoidably run into the inescapable conclusion that FAVOR and the modern concept of “grace” cannot be the same thing!  In the Hebrew the Strong’s word is H2580, in the Greek it is G5485.  The Greek word is “charis” and very commonly mistranslated as “grace” and whole false doctrines are built around those mistranslations.  They even infiltrate into the Hebrew in the so-called “old” testament and insert grace here and there as well.

Then we get into Galatians and after gaining the understanding that “grace” is a false translation we insert the correct word understanding of FAVOR and the verse looks like this:

Galatians 2:21  I do not set aside the FAVOR of God; for if righteousness comes through the law, then Messiah died in vain.”

Notice how “comes” is italicized.  The word “comes” does not exist in the Greek original.

The Bible translators made a decision to insert it for what they probably thought was for the sake of readability.

BUT, now notice the phrase in Galatians 2:21 which says “the law”.

The “the” in “the law” is not in the Greek original and the translators know this but they insert it anyway.

In dozens upon dozens of examples, in the original Greek manuscript the Greek reads THE (G3588) LAW (G3551) and ALWAYS refers to God the Father’s Torah/Commandments/LAW.

And, IN FACT, in almost all of the verses where Paul does this, Paul is speaking negatively about some “law”.

Anyone who has read the entire Bible from Genesis to Revelation knows YHVH God does not change at all.

So, to read something negatively about YHVH God’s LAW written by Paul would be scripturally and logically CONTRADICTORY!!!

It is completely obvious Paul is talking about some other law other than YHVH’s LAW because in Romans Paul describes THE LAW of YHVH like this:

NOW, you CAN SEE the difference!

Paul is referring to what today is known as Talmudic Judaism or the very same “traditions of men” that Yeshua Messiah was constantly at odds with the Pharisee’s and Scribes:

Mark 7:8-9  For laying aside the commandment of God, you hold the tradition of men —the washing of pitchers and cups, and many other such things you do.”

9 He said to them, “All too well you reject the commandment of God, that you may keep your tradition.

NOW, you CAN SEE!

Galatians 2:21  I do not set aside the FAVOR of God; for if righteousness comes through man made law, then Messiah died in vain.”

PSS…  You can SEE and SHARE all “THE LAW” posts here: https://thechurchofacts.com/share-the-law-posts/