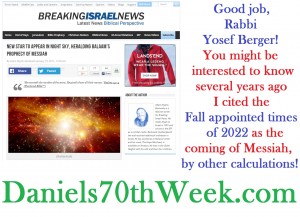 I was the first to point to 2022 as the coming or return of Messiah.

Few have been studious enough to review all the facts and begin to look for more evidence.  I seriously doubt many will until it is almost too late…

I knew in Spring 2011 that 2022 was the most likely candidate and nothing has occurred since that time to give me any reason to change my public declaration of that date.

In fact, I have more evidence than what I have shared and the revealing of those things is in the near future.

An astronomer in the U.S. has calculated the amazing destruction/collision of two stars in 2022 that will be quite visible from the earth and says the release of energy, in the moment, will be greater than released by our sin during it’s lifetime and he says the collision took place almost 2,000 years ago but the distance is so great it takes that amount of time to the light of it to reach the earth.

A Jewish Rabbi, Yosef Berger, cites a prophecy in Numbers as well as opinions from the 12th century and talks of Messiah’s coming.

Each passing day, I become a little more sure this is the time and the countdown of Daniel’s 70th Week started on September 23, 2015 as I declared publicly, long before and after that time.

It does absolutely NO ONE any good to know when these things occur!

Except for those who keep Torah and do not add to or take away from YHVH’s written Word He gave to the children of Israel and also placed perfectly into His Son, according to Deuteronomy 18:15-19, so that when His Son talked all the people of the world would hear YHVH speaking through His Son…

And except for those who repent and trust in YHVH God and His Son and seek YHVH’s Righteousness with all the heart, soul, mind/strength – just like God’s Son commanded everyone to DO.

The Righteous of Israel, both Israelite’s and former Gentiles, have always kept the Torah of YHVH, never adding to it or taking away from it.

And if they messed up?  They repented with all their heart, soul, and strength/mind and offered the correct sacrifice, carried out the full statute and ordinance and were restored to BLAMELESSNESS!!!