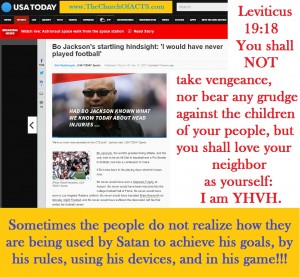 Football is a violent, risky sport.

Bo Jackson was one of the world’s greatest athletes and now says had he known the physical effects he would endure he would have never played football.  Jackson says he would not let his children play football.

I played football one year in high school and my back injury was enough for me never mind that I was a terrible player.  Like most boys, I played sandlot tackle pickup games in the neighborhood with no protective gear at all.  Sometimes kids got hurt.  My brother was a great football player in high school but knee injuries and surgeries forced him out of the sport and ruined his ability to run for the rest of his life.  This happens to so many people who play the sport and they are told to just accept it and most do.

Violence, seething anger, personal hatred, and pending revenge are all part of the makeup of football.  We read about it in the sports articles and we see it in the players and see it in the fans both adults and children.

We see much violence in the Bible, some of it is approved and directed by YHVH against pagan, idolatrous peoples who are beyond salvage but it is YHVH who deems they are beyond salvage and for His Reasons not His people’s reasons.

It is a VERY BIG MISTAKE to engage in violence without the express authorization of YHVH God the Father, our Creator.

Finally, we see violence against the people of Israel brought on Israel by YHVH Himself because Israel was not keeping His Commandments and had forsaken THE LAW (His Son) and were walking in pagan, even idolatrous ways so YHVH raises up Assyrians, Babylonians, Philistines, and others against His People in order to bring them back to Him and His Commandments and to keep ALL THE LAW which He has blessed them with so they can come to Him in right relationship.

Sports are used by Satan to lure YHVH’s people away from THE LAW and keeping His Commandments.  All of the sporting world is against the Sabbath of YHVH.

I regret the life I led as a kid, young adult, and old adult being such a sports fanatic and I repented of it and am fighting hard to keep the victory over it.  I look back over my life and all the sheer weeks, months, perhaps even years of accumulated time spent watching college and professional sports and being drawn into the violence of those things but more importantly being drawn into the commercialization and spirit of those sporting events.  Sports is BIG MONEY and it does not matter if your are at the professional level, college level, or high school level, and yes sometimes even very young levels in sporting is BIG MONEY.  For millions it is a way of life and a religion though most would deny it is a religion but if you examine how much time is spent on watching sports as opposed to Bible study and personal outward ministry it is easy to see people bow down to the false god of sports (and TV, movies, etc) by virtue shown in the examination of their personal time.

Every now and then we hear of people getting angry at kid sporting events and someone gets killed, trampled, maimed, beat up, and cursed and reviled against as just standard fare.

The really, really, REALLY SICK DISGUSTING pathetic, Satanic display of false religion is on full view when “Christian” movie companies make movies about football and faith and mix those things as if such were even possible.  And MANY of those types of movies have been made.  That is when Satan has full control over individuals making those movies and they have no clue of his devices and they are promoting violence, anger, and hatred against other people in the name of faith toward a false son of god they have theologically created and bow down to and play their sport on Friday nights and Saturdays showing they are 100% against YHVH’s Sabbath and show utter disregard for YHVH Ten Commandments and they do not even hardly realize though many do…  Never mind their anger and violence on the field shows they do not “LOVE” their neighbor!

Many of those Christian movies are emotionally and very deeply moving encapsulations of this false faith created against the Commandments of YHVH and people get caught up in the emotion and get sucked into it hook, line, and sinker to the point of tears they devise such emotionally moving stories.  But at the root of it is always UNSPOKEN defiance against the Commandments of YHVH to keep His Sabbath and bow down to Him not to false, theological gods who create life opposed to His Commandments.

One of the worst aspects of football is injuries that occur when a player is blindsided, hit without ever knowing they are being targeted.  Those hits and there are hundreds in a single game are some of the most injurious and THEY ARE MEANT TO INJURE make no mistake about it.

The legal sanctioning of violence does not make it right in the eyes of YHVH.

No one can liken a sport like this to training and preparing for battle in YHVH’s Army.

I do not like at all that within me is still the desire to flip over to ESPN on the internet and review sport’s scores.  But I have come a long way from a sport’s watching fanatic to a person who goes through the year and might only see a few minutes of any sporting event on a TV out at a restaurant.  At least at this time, I understand Satan’s game of sports and how he uses sports to destroy people by taking them, willingly, away from YHVH and His Ways.

When I was in the Christian churches I heard many times on Sunday morning or Sunday evening as services were hurriedly ended the remark from the pulpit “let’s go watch some football…!!!”

It does not take a brilliant mind to reveal a violent sport is in many, many, many ways against the Creator of the Universe’s Word.  When a retired NFL player takes his life in suicide and his brain is examined in autopsy and reveals the result of the violent impacts of decades of beatings that warped his mind that is all the evidence anyone, ANYONE should need.  It is not about whether the sport can be made more safe it is about the fact the sport should not exist at all…

Leviticus 19:18  You shall not take vengeance, nor bear any grudge against the children of your people, but you shall love your neighbor as yourself: I am YHVH.

Romans 13:8  Owe no one anything except to love one another, for he who loves another has fulfilled the law.

Romans 13:10  Love does NO HARM to a neighbor; therefore love is the fulfillment of the law.

Deuteronomy 32:35  Vengeance is Mine, and recompense;
Their foot shall slip in due time;
For the day of their calamity is at hand,
And the things to come hasten upon them.’

Romans 12:19  Beloved, do not avenge yourselves, but rather give place to wrath; for it is written, “Vengeance is Mine, I will repay,” says YHVH.

Hebrews 10:30  For we know Him who said, “Vengeance is Mine, I will repay,” says YHVH. And again, “YHVH will judge His people.”

Bo Jackson, in the article, says he believes in God and Bo sure knows we should NOT DO HARM to our neighbor…

Romans 13:10  Love DOES NO HARM to a neighbor; therefore love is the fulfillment of the LAW.