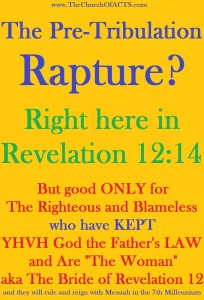 Is there a pre-Tribulation rapture?

That depends on what you mean by that question…

Is there a pre-7-year-tribulation rapture?  NO.  Part of Daniel’s 70th Week is back there in the 1st century and part of it is to come.

Once upon a time, eschatologists talked about a mid-Tribulation rapture and there is sort of a catching away in the middle of the final countdown towards the final 1260 days.

Is there a pre or beginning 1260 day Great Tribulation rapture?  ABSOLUTELY.

I received an email advertisement from a Messianic minister today who was telling people “thus says the LORD… there is no pre-tribulation rapture…” and it was the dumbest thing I have seen lately.

The neat thing about scripture is things are hidden in plain sight.  But until someone is given the ability to see it, it simply cannot be seen.

Who gave birth to Messiah?  Come on…, think!

To WHOM was Messiah promised?  Israel.

Deuteronomy 18:15-19  “YHVH your God will raise up for you a Prophet like me from your midst, from your brethren. Him you shall hear, 16 according to all you desired of YHVH your God in Horeb in the day of the assembly, saying, ‘Let me not hear again the voice of YHVH my God, nor let me see this great fire anymore, lest I die.’

17 “And YHVH said to me: ‘What they have spoken is good. 18 I will raise up for them a Prophet like you from among their brethren, and will put My words in His mouth, and He shall speak to them all that I command Him. 19 And it shall be that whoever will not hear My words, which He speaks in My name, I will require it of him.

Was Messiah promised to just ANYBODY in Israel?  ABSOLUTELY NOT!!!

It tells you WHO Messiah is promised to in verse 13.  The WHO is those who were the “YOU” in Deuteronomy 18.

Deuteronomy 18:13  You shall be blameless before YHVH your God.

Messiah is only promised to those who are BLAMELESS before YHVH.

So WHO is the YOU Moses is talking to…?  Who are they?

They are the YOU WHO marched across the Jordan River into Israel AND CONQUERED MAGNIFICENTLY!!!

They are the YOU WHO are RIGHTEOUS and BLAMELESS who stood before YHVH and did what He said to DO!!!

They and they alone are WHO Messiah was promised to…

They and they alone found favor before YHVH by doing what He said to DO!!!

Revelation 12 describes them as having given birth to Messiah!!!  (I’m so excited I can barely type)

They and they alone are just like the examples of the Righteous all through scripture WHO keep the Sabbath and the Commandments of YHVH just like Luke describes Zecharias and Elizabeth in Luke 1:5-6

Luke 1:5-6  There was in the days of Herod, the king of Judea, a certain priest named Zacharias, of the division of Abijah. His wife was of the daughters of Aaron, and her name was Elizabeth. 6 And they were both Righteous before God, walking in all the commandments and ordinances of YHVH blameless.

And YHVH’s Spirit working through John the Apostle penned them as “The Woman” (THE BRIDE OF MESSIAH) who gave birth to Messiah.  Messiah was born in Righteousness and was Blameless and was sanctified by the blood of The Covenant.

Yes, Messiah was sanctified by the blood of The Covenant.  Most people never seem to guess what that means BECAUSE they assume The Covenant has been done away with…  And since they do not know THE LAW or they dismiss THE LAW they live their lives completely CLUELESS.

Now, if you cannot figure that out then you had better believe you need to start studying as if there is NO TOMORROW!

And, if you do not keep the 7th Day Sabbath, there is no point in trying to figure it out…

“The Woman”, the Righteous and Blameless go to The Wilderness right before or at the 1260 days of the Great Tribulation.

But what about Christianity and those in Talmudic Judaism…?  They are LEFT OUTSIDE where there is darkness and weeping, and gnashing of teeth as my friend Yeshua put is so succinctly…

Every knee is going to bow and say Yeshua Messiah is Master.

Every knee is going to bow and say TORAH is YHVH.

And every knee is going to bow and say Yeshua Messiah IS TORAH.

All those 3 statements are the same as the major prophecy of Messiah and to whom he was promised, Deuteronomy 18:15-19 declares the WORDS spoken by the prophet Yeshua Messiah are the WORDS of YHVH that YHVH put into the mouth of His Son, the prophet, and as The Son says:

John 14:24  The WORD which you hear is not Mine but the Father’s who sent Me.

Yes Virgina, there is indeed a rapture or catching away for those found worthy!

But who gets LEFT BEHIND will absolutely amaze you as many Messianic ministers will get left behind because they violate YHVH’s Sabbath causing nonbelievers to work for them, among several other reasons…  And of course, all the Christian’s and Judaizer’s will be LEFT BEHIND as well because they add to and take away from YHVH’s Words.

“The Woman” is a small crowd, comparatively speaking, a remnant:

Isaiah 10:22  For though your people, O Israel, be as the sand of the sea, A remnant of them will return; The destruction decreed shall overflow with righteousness.

If you are out there watching, my Messianic minister friends and you still cannot answer the question as to how would YHVH explain to the man stoned in Numbers 15 for violating the Sabbath of YHVH that you a Messianic minister can violate it and pass The Judgment then you indeed will be left outside of The Wilderness of Revelation 12.

If you do not repent and do ALL the first works, you will not make it into The Wilderness…